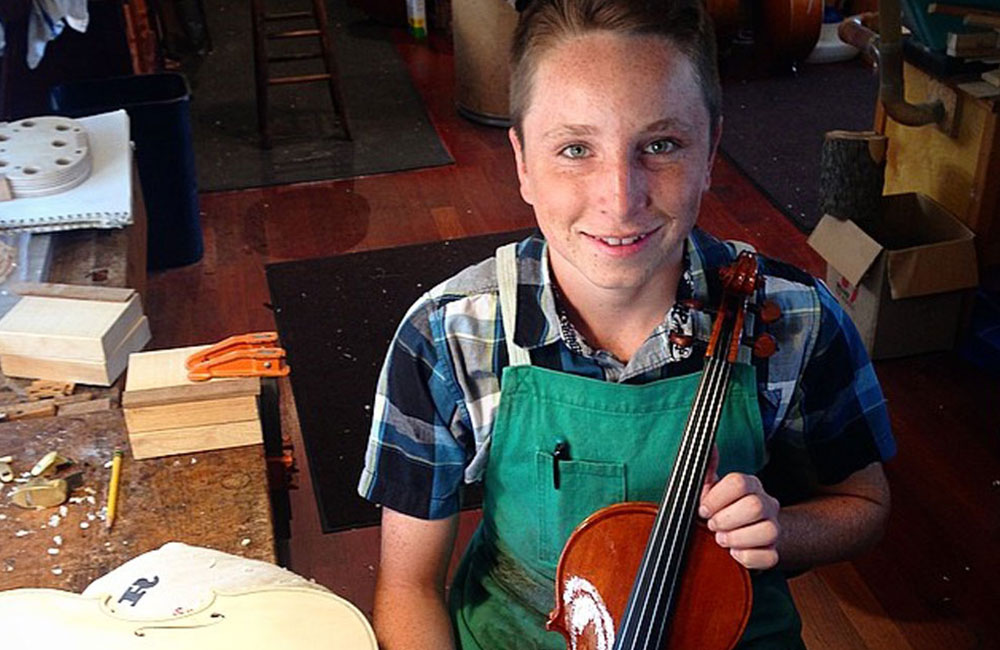 Crafted during time off of school during summer breaks, vacations and holidays, Nathan worked on this first violin in the Studio City shop of his well-recognized violinmaking family the Bennings of Benning Violins. The violin was made under the watchful eye of his father, Eric, and his grandparents, all who work together at their shop producing master crafted instruments that are played by a number of premier players, concert performers and recording artists.

The recently completed violin, modeled after a famous Stradivarius violin, the template that has been passed down through the family, is beautifully and skillfully varnished. It features a deep, rich tone that is, according to father Eric, comparable to the sound of violins crafted by makers who have been making violins all their lives.

“The violin is a beauty in terms of both how it looks and sounds,” stated the elder Benning, who completed his first violin between the ages of 9 and 11 in the very same workshop under the guidance of Nancy and Hans. “It’s a better looking violin and sounds much better than my first instrument, but he was mentored in a completely different way.”

The elder Benning’s first instrument, the "ex Raymond Wurfl", crafted after an Italian Guarneri model, has become highly collectible. Upon completion, the high profile teacher and Los Angeles music fixture Ray Wurfl, who played it throughout his career, purchased it.

The violin crafted by the younger Benning will not be sold but will be played and performed on by Nathan himself. Aside from his violinmaking skills, Nathan is also an accomplished violinist, having studied diligently over several years with his uncle Brian Benning, a professional violinist and teacher.

“I’m thrilled with the idea that Nathan may some day become the violinmaker in residence here at the shop,” stated Eric. “Like any teen, we expect that he’ll want to do his own thing. More and more, it appears ‘his own thing’ is crafting high-end instruments. He has a great pedigree, but more importantly, he has immense talent for violinmaking.”

For three generations, the Benning family name has been synonymous with the making of fine, master-crafted violins, violas and cellos.  Benning Violins has a long tradition of expert service and meeting the needs of musicians - from the beginner to professional - since 1953.