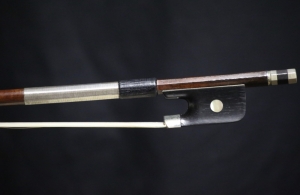 Description: Second son of Nicolas Èmile Piernot, Louis Piernot became one of the finest bow makers of his time. At a young age, Louis Piernot learned the bow making trade under C.N. Bazin and remained in his workshop until 1900. After his time with Bazin, Piernot moved to Paris where he studied under Arthur Vigneron to perfect his skill. With a brief interruption due to World War I, Louis Piernot’s career flourished in Paris and later Parmain. This particular stick is an excellent example of Piernot’s workmanship. Fantastic playing stick and in excellent condition. Mounted in nickel and ebony. The round stick is of a superb quality. Weight: 79.5 grams. Certified by Raffin.