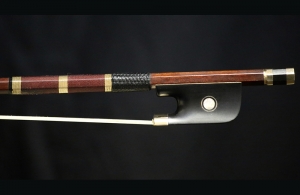 Description: Matthew Welling began crafting bows in 1991. He began his early studies by attending week long summer workshops with Bill Salchow. In 1995, Matthew spent eight months studying under Benoît Rolland. From there, he was able to join the shop of Georges Depho in France. Matthew eventually left France in 2001 and crafted bows along other contemporary bow makers in Port Townsend, Washington until finally moving to Northfield, Minnesota where he continues to craft fine bows. Matthew Wehling has received 5 gold medals from the VSA, putting him into the elite “Hors de Concours” category and was later asked to be a judge. In 2011, he received multiple awards in the City of Paris Etienne Vatelot competition.