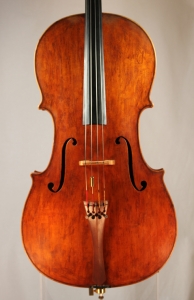 Description: Native Bavarian, Michael Fischer, attended the Mittenwald violin making school and has become a world renowned violin maker. After graduation, Michael continued making in London under Dietrich Kessler and later, Charles Beare. During the 1980’s, Michael moved to Los Angeles where he now builds such magnificent instruments. This particular cello is in great condition. Beautiful two piece maple back and a prominent dark varnish. Powerful, warm sound sought by the finest performers and soloists.