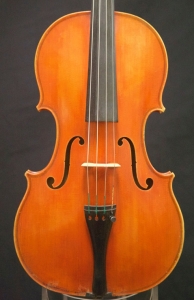 Description: Carl G. Becker was born in 1887 and completed his first violin at the age of 14. Soon after, he began working with Lyon and Healy before relocating to Chicago to work for William Lewis & Son. In 1968 he and his son, Carl F. Becker, who had joined him at Lewis in 1937, formed their own company: Carl Becker and Son. After military service, Carl F. rejoined his father at William Lewis & Son in 1946 and continued repairing and crafting instruments into his late nineties. This particular viola is a fine example of this father and son’s tremendous synergy in craftsmanship. Back length 16 1/8 inches.