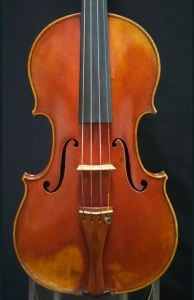 Description: Joseph Hel was born in Vosges, France in 1842. As a young man, Joseph Hel was said to have repeatedly abandoned the sheep so he could he wander off and see the violin makers in nearby Mirecourt instead. He was drawn to the cradle of French violin making where he dreamt of life in a different world, a musical world. In 1856, at the age of fourteen, Hel began his apprenticeship under François Salzard. After seven years as an apprentice, Hel worked for Sebastien Vuillaume before establishing himself in Lille in 1865. Throughout his career, Hel never lost the enthusiasm for violinmaking that he held during his youth. His constant search for information and progress led him to creating innovative methods of making and repairing instruments. According to the violin expert, William Henley, Hel’s craftsmanship and eye for detail was near perfect. This particular violin was formerly the property of Eugene Ysaye. Ysaye would frequently visit Hel’s workshop. We can imagine that he eventually saw this violin in the shop and fell in love with it. A beautiful back of the finest maple. A gorgeous, penetrating tone which is both rich and powerful. Papers include letters from the widow of Eugene Ysaye, Jeannette Ysaye, from June 7, 1950 and a sales receipt to the violinist, Remo Bolognini. Certified also by Bein & Fushi as the “ex-Ysaye”. This violin has been owned by professional violinists ever since. Please contact us to setup an appointment if you would like to audition this violin. Back length: 35.7 cm