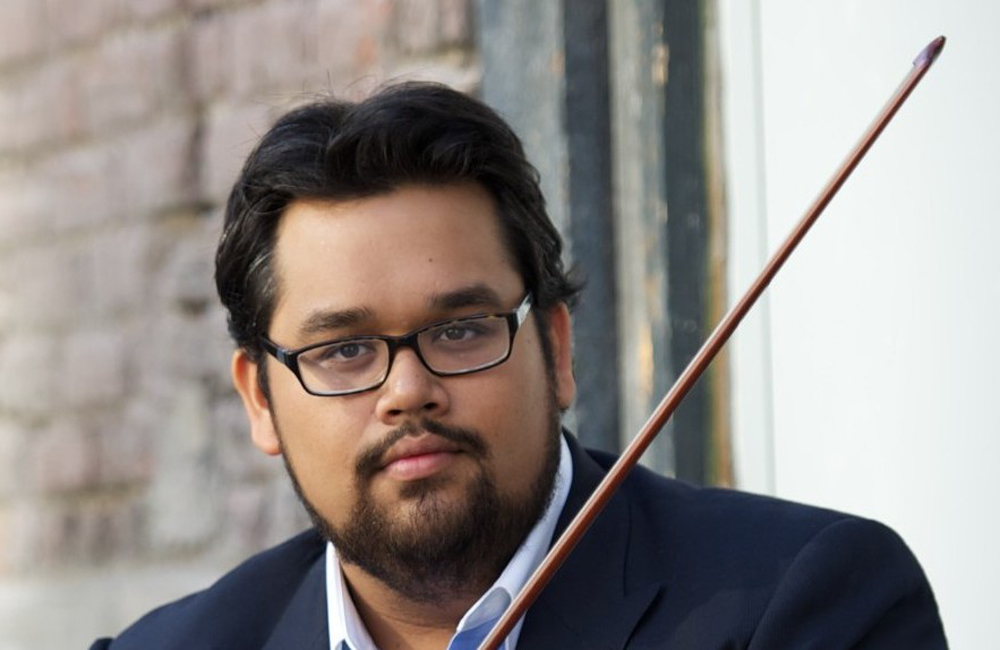 Critically renowned violinist, Vijay Gupta, has acquired a newly crafted violin by violinmaker Eric Benning. The instrument, modeled after a violin by Carlo Bergonzi, was completed in 2015 and is Benning’s 104th instrument.

Los Angeles, CA April 8, 2016 – Vijay Gupta, the critically acclaimed violinist, TED lecturer and member of the Los Angeles Philharmonic, has recently acquired a violin crafted by preeminent violinmaker Eric Benning. For more than sixty years, the Benning family name has been synonymous with the old-world craft of making master-crafted violins, violas and cellos.

Gupta, who performs on the Philharmonic’s priceless 1731 Domenico Montagnana violin, says he wasn’t looking to purchase a new violin when he reached out to Benning for a loaner.

“I was unable to take my Montagnana violin to Canada for a talk I was giving because of restrictions due to materials,” said Gupta. “I asked Eric if he would be willing to let me borrow one of his violins and he said, ‘I just completed this Bergonzi model. Why don’t you take it?’

“I didn’t want to let it out of my hands. I didn’t want to turn it back in. It felt perfectly made for me. It has a powerfully dark quality to the sound. I knew I had to get it. There was no feeling in my gut of, is this the right thing to do? It was the most natural and right thing in the world.”

Gupta, who joined the violin section of the Los Angeles Philharmonic in 2007 at the age of 19, has already had a storied career as a soloist, speaker and passionate activist. He has advocated for the presence of music in ostracized communities. He founded and serves as Artistic Director for Street Symphony, a non-profit organization dedicated to bringing free, live music to those living in homelessness and incarceration. A gifted spokesperson for human and mental health advocacy through a musical medium, Gupta is a TED Speaker, and a 2011 TED Senior Fellow.

Celebrated Italian violinmaker Carlo Bergonzi, a student of Antonio Stradivari, inspired the violin, the latest completed by Benning during the latter half of 2015.  Benning has described the violin as “special” noting it was made with Bosnian maple from the late 1940’s and the top from Northern Italian spruce from the 1920’s.

“The violin isn’t a full bench copy, where I am making it exactly like a notable violin sitting next to me on the bench, warts and all,” stated Benning. “A bench copy strives to capture the small details of the original instrument so that the copy and original look and sound the same.”

“This particular copy is more like how it would have been made new in Bergonzi’s workshop three hundred years ago. A slight patina to the varnish does make it visually more attractive than a straight varnish.”

Benning, no stranger to celebrity musicians – his father Hans, also a noted violinmaker, maintained “violinist of the century” Jascha Heifetz’s violins during the later part of his career – says he’s honored to have an artist of Gupta’s caliber playing his violin.

“Vijay isn’t just a talented musician. He’s gifted across the board. His story is compelling and his humanitarian work, inspiring,” said Benning. "There’s something very satisfying in knowing that my 104th instrument is helping Vijay perform his good work both on and off the stage.”

Benning Violins has become a mainstay institution on the West Coast for premier performers as well as other concert and performing artists, renowned teachers, amateurs, students and players of all levels since 1953.  Benning Violins offers service and sales of fine violins, violas and cellos, crafted by both past and present masters.