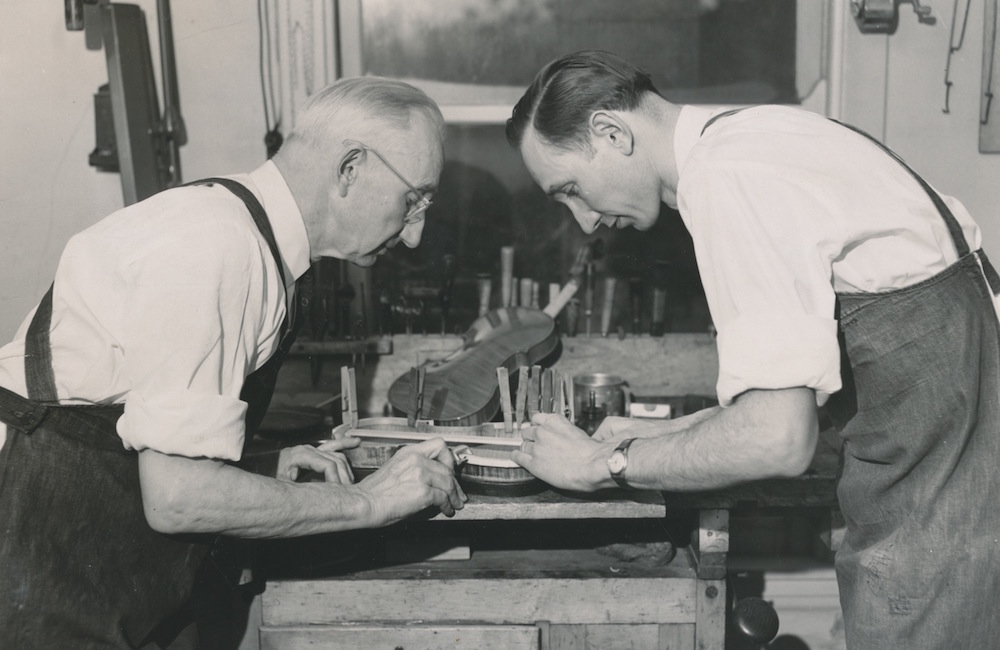 Now the most highly valued violin on the planet, the iconic instrument was refurbished almost 40 years ago in Carl Becker and Son’s simple Chicago studio.

Today, a non-descript condominium building stands at 1416 W. Belmont Avenue in Chicago. This is in the re-gentrified Lakeview neighborhood of the city’s North Side, an area that not long ago was tired and tattered, a stretch of cash exchange depots and tattoo parlors. At this particular address once stood the second floor studio of Carl Becker and Son, violinmakers and repairers of fine instruments, in a building that evidently was demolished sometime in the 1990s.

What probably few people then and perhaps no person today on that block realize is a very valuable Stradivarius violin was “resident” there for a while as it was being refurbished by the Carls Becker, father (Carl G.) and son (Carl F.).

The Becker operation is obviously a family business. It goes back to the late 1940s and their descendants continue their craft today. The son in the firm’s name was Carl Frederick Becker, who died in 2013 at the age of 93. His children and grandchildren now operate the firm in the city’s Loop (central business district) a few miles south and, notably, within walking distance of Chicago’s Lyric Opera and Symphony Center concert halls.

The Beckers have a long-established world-class reputation. So perhaps it shouldn’t be so remarkable that in the 1970 and 1971 – in the simple second-floor walkup shop on Belmont Avenue where the Beckers crafted and repaired fine stringed instruments – that a particularly well-known and extraordinarily valuable Stradivarius violin was kept there for an important repair.

This instrument is known as the “Lady Blunt Strad,” so named because it was once owned by Lady Anne Blunt, the daughter of Ada Lovelace (a mathematician and writer who conceived the idea of the computer) and granddaughter of England’s Lord Byron. It was made in 1721 by the master Cremonese luthier, and was last sold at auction in 2011 for $15.9 million USD, the highest price ever claimed by a musical instrument.

That such an expensive and exquisite instrument, probably the most valuable Stradivarius in the world, spent several months in the Becker studio in Chicago isn’t quite so surprising for anyone who knows the Becker family and their work. The shop under their name had only been open for a couple of years when the Lady Blunt was placed in their hands, but both father (Carl G.) and son (Carl F.) had previously worked with the respected William Lewis & Son, also in Chicago. Their skills were well known and they easily drew customers with repair-worthy violins, violas and cellos.

Father Carl G. was well known as a violin maker. Son Carl F. crafted over 500 instruments with his father, spending the rest of his career in the repair business and making a modest amount of instruments on his own.

The Lady Blunt Strad was owned by Tarisio Auctions when Becker repaired it. Once it was restored, it sold for $201,000 at auction. The buyer (Robert Lowe) owned it for 30 years, after which it was acquired by the Nippon Music Foundation for $10 million. The Foundation put it up for charitable sale to benefit the victims of the 2011 Tohoku earthquake and tsunami (in Japan), where it sold for $15.9 million. It is rarely played.