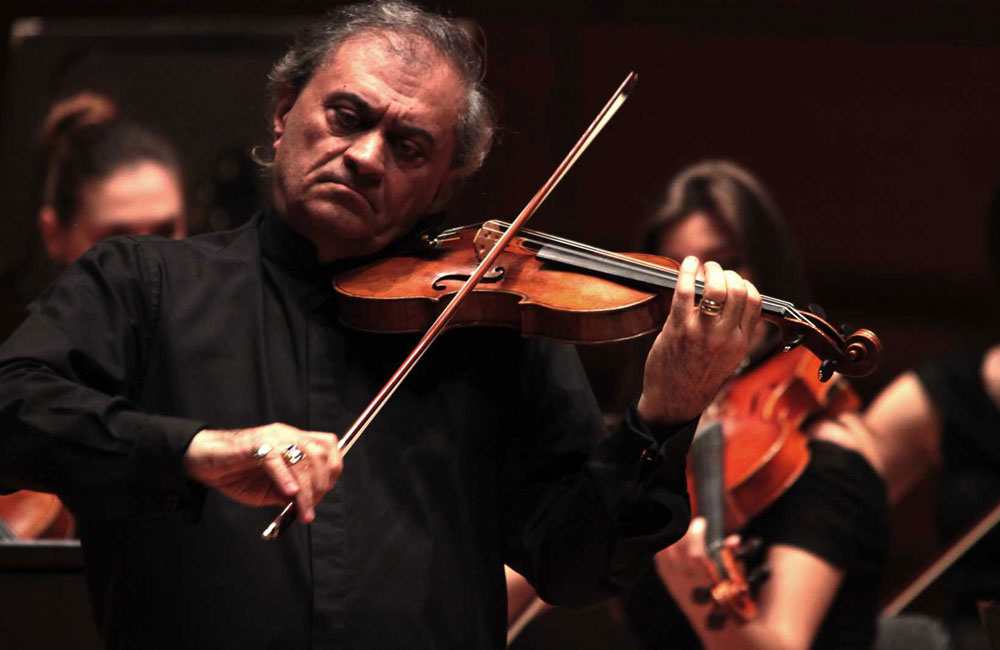 World renowned Russian conductor and concert violinist Ashot Tigranyan has recently acquired a violin crafted by master violinmaker Eric Benning of Benning Violins in Los Angeles. The 2011 violin, modeled after a well known and celebrated 1748 violin by the Italian master Tommaso Balestrieri, will be performed on by Tigranyan on his upcoming tour of Mallorca, Spain.

Los Angeles, CA. September 10, 2012 – Renowned conductor and concert violinist Ashot Tigranyan has acquired a violin crafted by violinmaker Eric Benning from his Los Angeles violin shop in Studio City, California. Benning Violins is an established and distinguished institution that has been offering sales of fine instruments by old and modern masters to the classical music scene of Los Angeles since 1953.

“Los Angeles is a hub for many great classical artists and we have many marquis artists of Tigranyan’s caliber come through the door,” explains Benning, who hand-crafted this particular violin only a year ago. “An artist typically will go into the playing room where we set out maybe four to eight instruments for them to try out. My own instrument was mixed in with older master violins and after playing the violins and listening to them, he chose my Balestrieri copy.”

Tigranyan, who graduated from the Moscow State Conservatory where he studied with the legendary Russian violinist Leonid Kogan, will be performing with the Benning violin in his five-date September tour of Mallorca Spain that will see him on the stage in the cities of Llucmajor, Palma and Artà. He has performed extensively throughout Russia, Europe, and the United States.

The violin was crafted by Benning in 2011 and was modeled after a famous violin by the Italian master Tommaso Balestrieri from 1748. "The instrument is a rich, powerful instrument of noble beauty," states Benning, whose violins, violas and cellos are now widely collected and played today by many prominent musicians. “It is a stunning soloist instrument with a truly complex sound.”

Tigranyan has recently added to his solo violin career by becoming the Founder and Music Director of the exciting, virtuoso Classical Concert Chamber Orchestra, which performs music selections by Bach, Vivaldi, Mozart and others. Combining both his skills as a conductor and solo artist Tigranyan performs an extensive concerto repertoire.

As for Benning, he is thrilled to put another one of his fine instruments in the hands of one more distinguished performer. “When a well known artist who knows music acquires a modern instrument, it's good for all modern artisans because it proves that we've learned to create instruments as good as the old masters. Like my dad always says, ‘Stradivari only made new instruments’”.