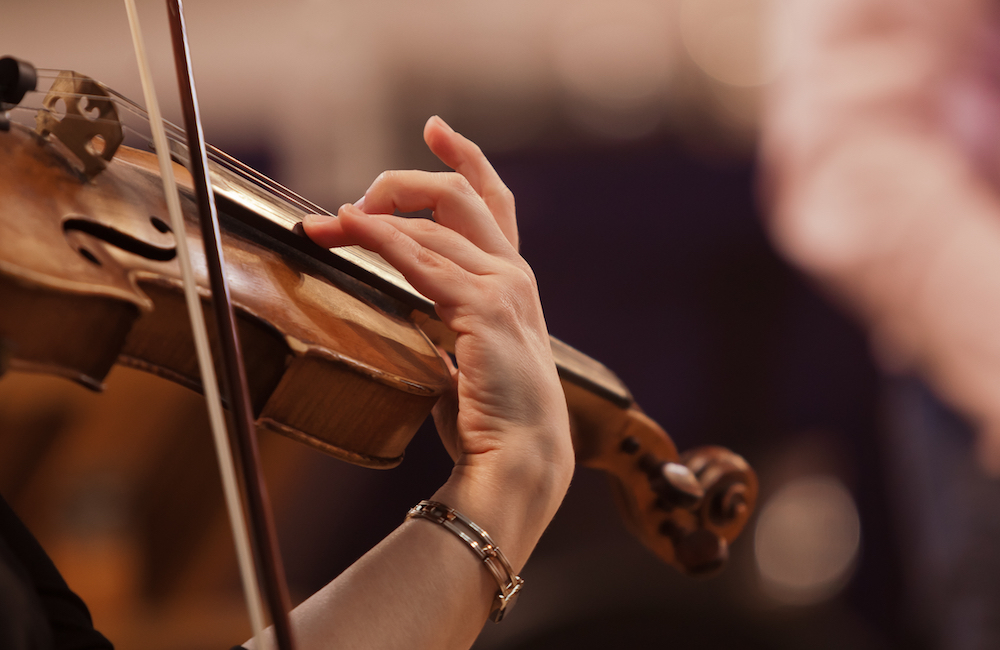 Instruments like violins and cellos produce harmonic tone vibrations, involuntarily or by intent, from strings other than the string being played.

Students of stringed instruments who also have an affinity for physics are likely delighted with the subject of harmonics. They not only understand how vibrations are at the core of producing sounds, but that all things are related – including the strings of a violin, cello, bass, harp or guitar that are not directly involved in the principle note being played in any particular instance.

Indeed, when the E-string is being played, the G-, D- and A- strings vibrate as well, producing what are known as overtones. The effect on human ears is that a warmer, well-rounded sound is perceived. An overtone is a full octave higher than the played note. Interestingly, the listener doesn’t explicitly perceive the overtones.

There two types of harmonics, with decidedly different effects and requirements of the player:

The harmonic created by the artificial method is done so by (lightly placing the third or fourth finger on the string where the harmonic node would be found (nodes are the ½, ¼, or 1/8thplace on the string, where the natural overtone is otherwise produced). By placing the finger at these points, the violinist interrupts all the other overtones except this one.

This is science and math applied to music. But there remains a fine art and human physicality in producing an artificial harmonic as well: just the right amount of pressure – not too little and not too much – has to be applied.

The sheet music calling for string harmonics is identifiable by tiny diamonds shapes over a note or notes (in some cases a circle above the note, along with the finger number, is the notation). In most cases, the composer is driving for a bell-like quality to the tone, which can create a better blend of tonality with flutes and piccolos (instruments that also have a bell-like sound). Because violins and violas have a shorter neck, the players of these instruments have to think with a bit more mathematical precision to produce the harmonic. Cellists and bassists have a bit more freedom because of the longer necks of those instruments.

What is the most likely instance of a stringed instrument harmonic? A sound that is two octaves and a major third above the fundamental tone – tones that are otherwise inaccessible on the instrument. Harmonics are more easily achieved on fine stringed instruments, which are generally easier to play than poorly crafted ones.

It involves a stretch of the effects of vibrational frequencies that any physics student could love.

Tomorrow, Saturday, you are cordially invited to our 70th Anniversary Open House from 2 to 6 PM. Expect exhibits, d… https://t.co/rPx8VbazJl

A fine #viola crafted in 1949 by #Italian #violinmaker Genuzio Carletti is available for examination and trial. Thi… https://t.co/eI4wKny08Z