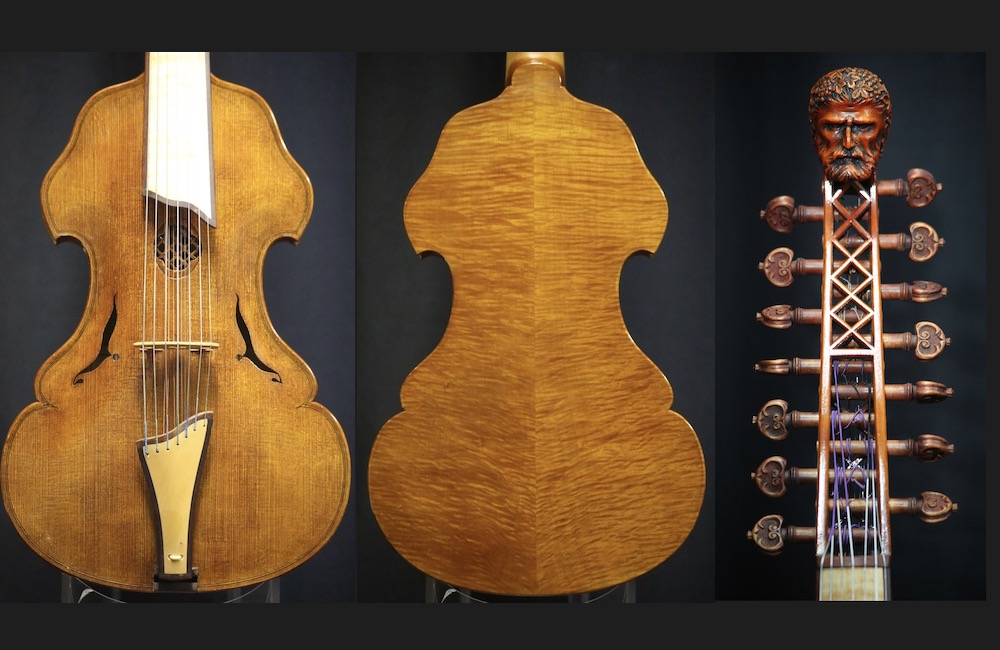 The special resonance of this early music instrument – which has its modern-day fans – is due to sympathetic strings that provide a distinct undertone.

“There is something about the emphasis of the very low, and the very high register of the viola d’amore, that for me is quite profoundly moving.”

So wrote a champion of the somewhat obscure member of the viola family, the 6- or 7- stringed instrument most associated with baroque period music. Rachel Stott is a contemporary composer and player, based in London with an impressive resume from her studies (Wells Cathedral School, Guildhall School of Music and Drama and Churchill College, Cambridge) and membership in groups that include the Revolutionary Drawing Room, the Bach Players, the duo Sopriola, Trio Notturno, and she plays regularly with Ludus Baroque.

“Can any instrument moan or wail or keen quite as well as the viola d’amore does here?,” she continued. “When I have played the recording for my colleagues, very often they have trouble guessing what instruments are playing.”

One might describe the tonality of the viola d’amore as ethereal, and there is a specific reason for that. In addition to standard viol family characteristics – similarly sized, a flat back, intricately carved head at the top of the peg box, sound holes (often shaped like a flaming sword in an Islamic reference, although some interpret it as a “flame of love”), unfretted, and played horizontally – it has a second set of sympathetic strings located under the primary set.

Finding Viola d'amore's for sale isn't always a simple matter, due mostly to the fact that modern luthiers don't craft them very often. When older, finer instruments are are offered for sale, they are usually quickly purchased by enthusiasts and players.

Alternatively called “resonance strings,” sympathetic strings are strings untouched by the bow (except when an unusual effect is desired). They provide an undertone based on the principle of sympathetic resonance. The unstruck under-strings will nonetheless vibrate in response to the primary strings in harmonic likeness. To understand how this works, strike a tuning fork mounted on a wooden box that has a second tuning fork attached to it; mute the struck fork to hear how the second fork sounds from picking up the vibration. Some describe the secondary tone as “a silvery halo.”

Sympathetic strings are used in other instruments from other cultures, including the Hardanger fiddle (Norway) and sarangi, sarod, and sitar (Hindustani). Sympathetic resonance also occurs in primary (played) strings found on guitars, harps, harpsichords, lutes and pianos.

The viola d’amore was most popular in the late 17thcentury, favored by composers that include Antonio Vivaldi, Christoph Graupner, Georg Philipp Telemann, Carl Stamitz and Joseph Leopold Eybler. J.S. Bach included arias and cantatas that are written for the viola d’amore.

In modern works (1840 to the present), Louis van Waefelghem, Charles Martin Loeffler, Paul Hindemith and Ottorino Respighi included the instrument in their works, sometimes giving it star billing. Stott herself has written at least five scores that feature multiple viola d’amore musicians, including Odysseus in Ogygia (2011) written for six of the viola d’amore players. It was presented at the 2012 Viola d’amore Congress held in Innsburck, Austria. She draws inspiration from her eclectic studies in composition, ethnomusicology, jazz, early music, and her 2003 residency as a composer at Blackpool Victoria Hospital in Lancashire, England where she observed an operation on a patient’s ear (she wrote a viola d’amore piece titled Gulliver’s Ear).

What better a subject to take advantage of that silvery halo sound?