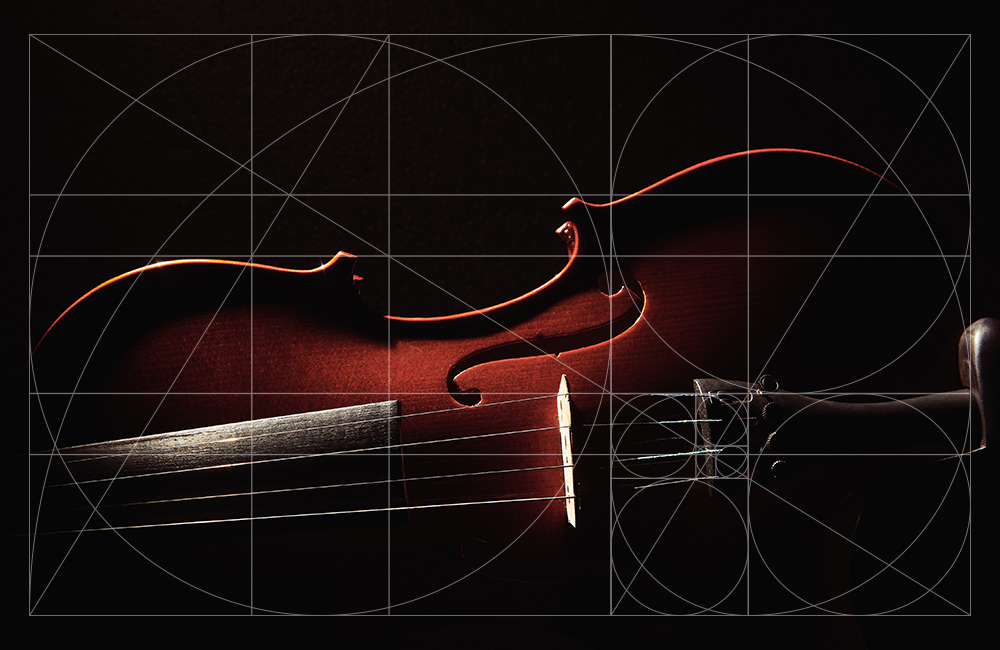 Math is intrinsic to music. But what’s truly fascinating is how the designs of fine violins, flowers and huge galaxies connect to Fibonacci’s Golden Ratio.

The Fibonacci Series might sound like a spy thriller, but it’s perhaps more exciting because it draws a direct, mathematical connection between the human perception of beauty and nature itself. It also was the basis for the proportions that Antonio Stradivari used to construct his eponymous violins.

Represented in geometric forms these numbers and the Golden Ratio create a spiral that is seen in both art and nature. To a musician, the bass clef is essentially this form. Leonardo da Vinci’s Mona Lisa is composed of points that conform to this geometry. Mozart wrote many of his two-part sonatas according to the Golden Ratio: the exposition (musical theme) is 38 bars and the development and recapitulation (where the theme is developed and repeated) is 62 bars, and 62 divided by 38 is 1.631. Western harmony and musical scales, with 13 notes in an octave and eight notes in a scale, also produce (via division) 1.625.

With Stradivarius’ fine violins, the master violinmaker’s designs follow the Golden Ratio in the proportions of specific parts of the violin. The violinmaker ensured the proportion of the neck, pegbox and scroll to the body of the violin (upper bout, waist and lower bout) achieves the ratio. Also, subdivisions of the instrument – waist to upper bout, waist and upper bout to those sections plus the neck – meet the 1.6 ratio as well. (Note: there seems not to be the same mathematical principle applied to fine cellos, violas, and stringed bass instruments created by the master maker).

Is this what make the music from a Strad so rich and resonant? So many other factors are involved (the density of Cremonese wood in the 17thcentury, for starters) but it bears noting that the Golden Ratio is also used in saxophone mouthpieces and the acoustic design of many cathedrals. In the Journal of the American Viola Society, a 1994 analysis of Bartok’s Concerto for Viola and Orchestra (Movement Two) argues the composition relies heavily on the Fibonacci Series.

Where this takes a fascinating turn is how the Golden Ratio and its geometric representation is found in nature and even in space. The logarithmic spiral, found in seashells and sometimes called “the golden spiral,” look a lot like that bass clef and range in sizes from tiny to much bigger – all within the same ratio. But those same spirals repeat in spiral galaxies, where the arms of stars, gas and dust extend from the galaxy center in a pinwheel-like fashion – a pattern in proportions also seen in satellite images of hurricanes. The human face, by the averages, follows the Golden Ratio in where the eyes, nose and chin are positioned. The proportion of DNA molecules, 34 by 21 angstroms, fit the ratio as well. In flower petals, the lily has three, buttercups have five, chicory flowers have 21 and daisies have 34. Nature places all petals in the 360-degree circle, at a turn of 0.618030 (an inverse of the 1.6 ratio). Seed heads in sunflowers repeat the spiral seen in these other examples.

Is it possible that this Fibonacci Series is a universal proportion, determined by some version of intelligent design? That’s subject to some debate, to put it mildly. But what’s clear is it all adds up in Stradivarius violins playing Mozart sonatas.