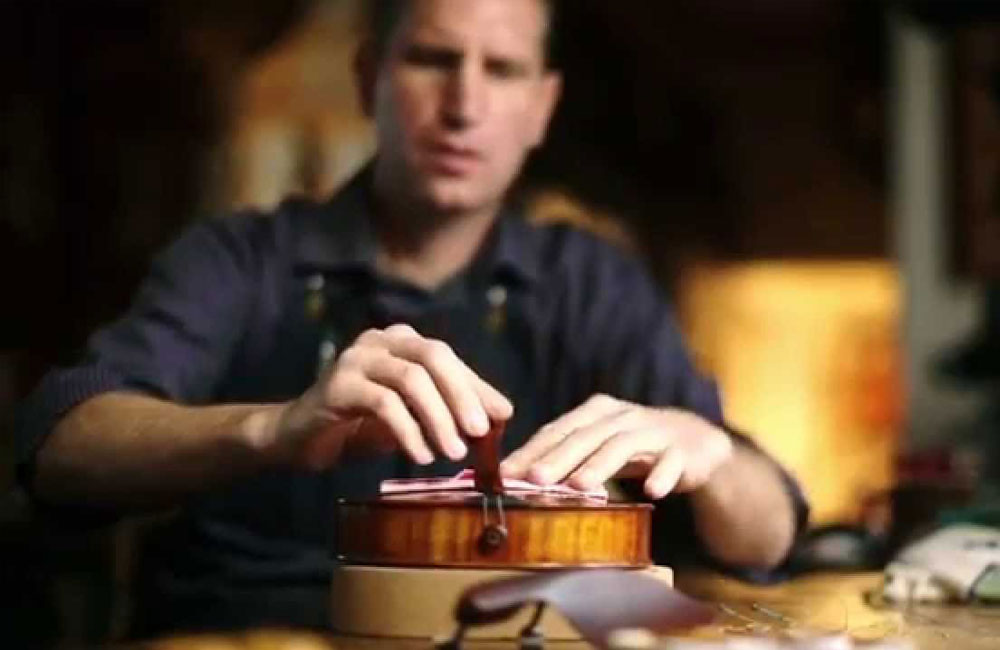 Director, cinematographer and filmmaker Michael Bernard has released an original short film chronicling the story of the Bennings, the family of distinguished violinmakers based in Los Angeles.

Los Angeles, CA - June 10, 2015 - Director, cinematographer and filmmaker Michael Bernard has released an original short film chronicling the story of the Bennings, the family of distinguished violinmakers based in Los Angeles. For four generations, the Benning family name has been synonymous with the making of fine, master-crafted violins, violas and cellos.

According to master violinmaker Eric Benning, “in a period of increasing acclaim and recognition for our shop, acknowledgment in the form of a short, artistic film that is itself a masterful piece of art came from out of nowhere."

"Mr. Bernard told us that he wanted to tell a story of a craft handed down from generation to generation," stated Benning. "Even though we saw samples of his work, and cooperated with him to produce the film, we weren't prepared for the profound level of creativity, technical skill and his overall vision of what he wanted to convey and his success at doing so."

The eight minute video short, titled "The Violinmaker" is the second in a series of shorts by Bernard called "Finding Bespoke". The film relies on interviews with Benning, as well as with parents Nancy and Hans, themselves acclaimed luthiers. Brian Benning, artist-in-residence as well as a luthier, and 4th generation makers Nathan and Garrett, sons of Eric Benning, make appearances. Los Angeles-based violinists Roberto Cani, Annelle Gregory and Hannah Suh perform in the film.

An engaging soundtrack compliments new interview footage with intricate and stunning shots of instruments being crafted, as well as of the workshop populated with antique machinery that is still in use, while showcasing various tools of the instrument-making trade.

"The Bennings were brought to my attention by a violinist friend," stated filmmaker Bernard. "She told me they were a multi-generational family practicing the craft of violinmaking. After seeing their shop and talking with Eric, I knew they were perfect. They are passionate people who love their craft."

"Their shop lent itself perfectly to the way I understand and practice cinematography. I'm guided by photography and by lighting with the goal of creating an emotion visually and then capturing that emotion through composition. Though it's only an eight minute video, I used every tool in my arsenal to bring this provocative story to life."

Working as a seasoned commercial director at Believe Media, an influential and award winning International media and production company, Bernard has created successful spots for such major brands as Victoria's Secret, Lexus, Aveeno and Max Factor. He has worked closely with some of the biggest directors, entertainers and artists in the film and music industry. The film was produced by William Butler-Sloss, and edited by Patrick McCarthy at Moondog Edit based in New York City.

"The film makes us feel humble and grateful," said Benning. "Generations of loyal customers have been a significant part of our story and have allowed us to be a part of their story. We feel a great deal of appreciation for them and to Michael Bernard for his kind and sensitive portrayal of the Benning Violins story.”

The video may be viewed at http://www.benningviolins.com/finding-bespoke-the-violinmaker.html

"The entire Benning family were both a pleasure and an inspiration to film. I only hope that my film does justice to the wonderful care and craft of their violin making," said Bernard.

Benning Violins, based in Studio City, CA, has a long tradition of expert service and meeting the needs of Southern California musicians - from the beginner to professional - since 1953. Fine violins, violas and cellos crafted by Eric are played by a number of premier players, concert performers and recording artists.