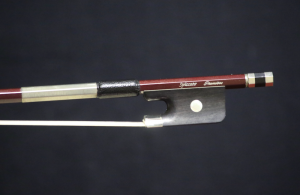 Description: Born and educated in France, where he began to make bows more than 44 years ago, Benoît Rolland now resides in Boston, Massachusetts. At sixteen, he graduated from the Conservatoire de Paris and Versailles with a focus on violin and composition. As a young violinist, he learned that a bow can influence the behavior of both the violin and the player. Joining the Bow-Making school of Mirecourt in 1971, Benoît learned bow making from Bernard Ouchard, the last historical French master. Upon graduating from Mirecourt, Benoît returned to Paris, where he opened his own studio in 1976, on rue de Laborde. He soon became the youngest person ever nominated Meilleur Ouvrier de France in the history of the competition (Best Artisan of France). He received in 1983 the rare national title of Maitre Archetier d’Art. In 1982, Benoît moved to the island of Bréhat where he researched and made carbon fiber bows of concert quality. Bringing the project one step further, he invented a new generation of bows including a tension mechanism that allows the performer to adjust at will the camber of the bow. The bows embodying this invention were awarded First Prize Musicora in 1994 (also selected for Musicora Anniversary, 2004), and are distributed under the trademark Spiccato®. Lord Menuhin, Jaime Laredo, Heinrich Schiff, Jean-Luc Ponty and Christian Tetzlaff endorsed this revolutionary concept. As the first maker to develop carbon-fiber bows with a playability rivaling pernambuco wood, Benoît Rolland led the field towards a deeper understanding of the carbon’s potential. He now offers his expertise on cutting edge bows technology. Benoît was part of the International Symposium of Physics of the Music, in Washington DC, 2005. In 2008, the Museum of Making Music, San Diego, hosted an 8-month exhibition around the violin. Both Rolland pernambuco bows and the Spiccato bow were featured in this event. With his wife, the painter Christine Arveil, he established his studio to Boston in 2001, where he continues to write music and create bows for great musicians.

This particular cello bow is his Spiccato “Premiere” model with the adjustable camber. It is in near mint condition at this time. Weight: 83.5 grams.