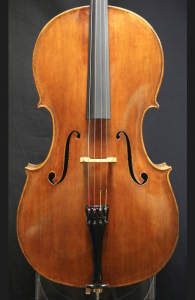 Description: Born in 1877 in the culturally rich city of Ferrara, Ettore Soffritti quickly became one of Italy’s premier craftsmen. As a young child, Ettore began learning the basics of violinmaking under his father, Luigi Soffritti. At age 15, Ettore embarked on his own career, and later suffered the loss of his father at age 19. It is believed that Ettorre Soffritti studied under Raffaele Fiorini in the mid to late 1890’s. It wasn’t until 1905 that Ettore’s instruments show a profound quality and direction in his career. By 1911, Soffritti had won numerous gold medals in national and international competitions, and acquired various pupils of his own. Among these students were Anselmo Gotti, Ernesto Pevere, Enrico Orselli, and Gaetano Pareschi.

This particular cello is made of truly exceptional woods. The back is fashioned from tight, irregular and deep flamed maple. Ettore allowed the wood texture to develop naturally under his tools. The top is made of two-piece spruce of the highest quality. The sound is rich and powerful. A full bodied core to the sound which comes across easily. An exceptional sounding instrument suitable for the finest of cellists.