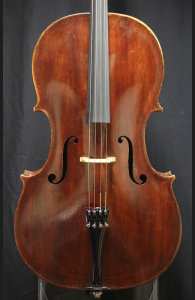 Description: James Banks (1758-1831 and 1770-1830) assisted his father, Benjamin until his death in 1795, and continued his business in Salisbury until 1811 before moving to Liverpool where he worked until 1831. Although instruments are labelled to indicate a partnership between the two brothers, (James & Henry), Henry’s skills involved the pianoforte, and signatures inside these instruments reveal that James was the only maker. Distinguishing between the work of Benjamin Banks and James is to an extent academic because they continued the same tradition from father to son, and because many of the instruments sold by the two brothers appear to be stock, or comprise parts inherited from their father. Nevertheless, later instruments including those made in Salisbury from about 1790 have a more transparent varnish closer to London work of the same period and in contrast to the milky and opaque varnish used earlier. Likewise scrolls tend to be crisper and classically cut, contrasting with the rounded chamfers and deep undercutting that typifies Benjamin Banks, and in the final years before his death in 1795 the contrasting hands of father and son can be seen of different instruments. At his best, surviving works hint that James was a superior maker than his more famous father.

This particular cello is in extremely remarkable condition for it’s age, with no post or bar cracks. It also still retains it’s original neck. The sound is rich and penetrating. Very powerful and comfortable to play. The body length and string length being petite, makes this really a joy to play for someone. Back Length: 72.7 cm. String length: 67.0 cm. Certificates by: W.E. Hill & Sons, 1925 and William Moenning & Son, 1952.

Terms: This cello is available for examination and trial and has been meticulously set up to our exacting specifications before addition to our catalog. If you wish to inquire further about this cello, please contact us using the green button at the top of this listing or call 1-818-762-1374 during business hours.