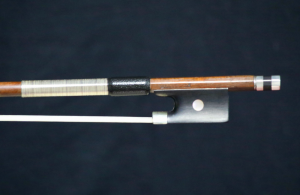 Description: (1850 – 1918) - Son of François Peccatte and nephew of Dominique, Charles Peccatte was born into a family of great bow making pedigree. Following his father's death in 1851, he began his apprenticeship in 1862 to his stepfather Auguste Lenoble, and moved to the firm of J.B. Vuillaume in 1865. There he worked under François Nicolas Voirin for the next five years, producing workshop bows that imitate Vuillaume's work almost perfectly.

Peccatte's early independent output still follows a Vuillaume model and is usually branded, "Peccatte à Paris," which he later used for lesser workshop bows. Upon leaving the Vuillaume firm in 1870, Peccatte was forced to seek supplemental work as a government employee, which he continued until 1885, when he was awarded a Silver Medal at the Antwerp Exhibition and he gained considerable prestige. His work of this middle period is usually stamped, "Peccatte" and features elegant materials and strong heads in the style of the other Peccatte makers. Starting around 1900 Peccatte employed several assistants to produce some of his bows, including Eugène Sartory, whose early work shows Peccatte's influence. He worked steadily until his death in 1918.

This bow is an excellent example of Charles Peccatte’s later work. Weight: 58.5 grams. Certified by Paul Childs of NY, NY.