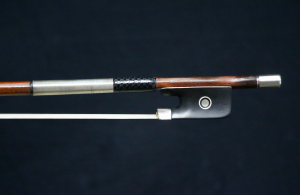 Description: Bow maker, (1900 – 1969). Bowmaker Émile Auguste Ouchard first studied with his father Émile François at the Mirecourt shop of Cuniot-Hury and began to assist him around 1913. Father and son continued to work together after Émile Francois opened his own shop in 1923, and Émile Auguste began to produce increasingly well-crafted work in collaboration with his father. After around 1930 his work matured, becoming rounder and more refined. He began to use Hill underslides in the mid-1930s.

Ouchard left for New York in 1946, where he worked independently until securing an exclusive position with the firm of William Lewis & Son in Chicago in 1948. He continued to work independently and in 1951 he returned to New York, where he worked for nine years before finally returning to Paris in 1960. He suffered a stroke shortly thereafter and unfortunately his work never again reached the same high standard. Ouchard used four stamps over the course of his career that reflect his whereabouts: "E.A. Ouchard Fils," "E.A. Ouchard Paris," "Émile A. Ouchard New York," and "Émile A. Ouchard.”

This bow is an excellent example of E.A. Ouchard’s golden period of bows. The round stick is superbly balanced and draws a rich, beautiful tone while being easy to manipulate. Typical handle wear to the frog and stick indicative of a great players bow. The button is not original to the bow. Certified by Isaac Salchow of NY. Weight: 60.0 grams.