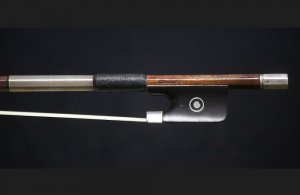 Description: Louis Morizot Père was born in 1874 in Darney, Vosges of France. From about 1901 to 1914, Louis apprenticed under renowned bow makers Eugène Cuniot-Hury as well as Charles Nicolas Bazin. From there, Louis Morizot began his apprenticeship under Eugène Sartory. Louis established himself independently in 1919 at 5 rue St Georges in France. His sons began to assist him in 1920 and his shop became extraordinarily successful. Louis Morizot Père died in 1957 and his sons continued in their fathers success.

This particular bow is in excellent condition. The round stick is silver and ebony mounted. Weight: 59 grams. Certified by Paul Childs.