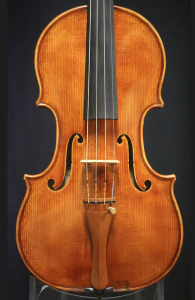 Description: David Wiebe grew up in Beatrice, Nebraska in a musical family. They owned a lumberyard, so he gained his interest in fine woods and finishing early on. David began playing the bass in high school, and he wondered if he could improve the quality of his low-end instrument by re-varnishing it — and thus began his love for instrument repair. He studied violinmaking in Mittenwald, Germany at the Staatliche Fachschule fur Geigenbau, after which he opened a small repair shop in his hometown. Eventually he realized he wanted to focus on making rather than repairing, and began making instruments in his home in David City, Nebraska. He has taught at the Oberlin Violinmaking Workshop many times, and currently works out of his home and workshop in Woodstock, NY.

This fantastic violin is in pristine condition and produces a very powerful and dark tone. Back length: 35.5 cm.

This #church in Foshan, #China, was built to house a congregation that wanted to show that #Christianity, like lear… https://t.co/0SiGQRGmXp