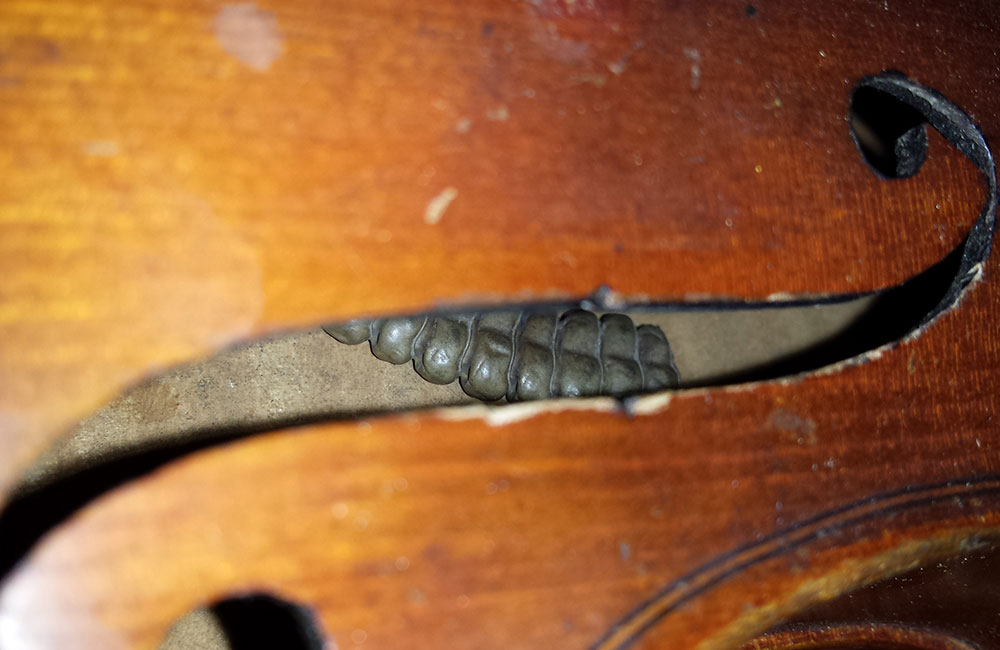 Violinmakers do not typically include parts of expired animals in their fine instruments. But nonetheless fiddlers add snake rattles for a variety of reasons.

The place of the violin in the hills of Appalachia and on the plains of Texas, and along many points in between, is one of great cultural richness. Before electronically recorded music, the fiddle was perhaps the only source of music available to the common man. There may not have been a “name” violin maker in Kentucky, no Stradivarius in South Carolina, and no fine cellos or violas made in Tennessee. But whether through roaming Roma (gypsy) troupes and merchants, or later from the Sears catalogue, those fiddles found their way to the churches, dancehalls, schools and barns of the old South. And people danced.

The fiddle remains an important instrument in rhinestone-studded country bands as well as their cousins in the bluegrass and even folk music genres. And sometimes, if you look inside those fiddles – perhaps not at a violin shop, but in the hands of a fine fiddler – you might find the rattle of a very dead snake.

Indeed – rattlesnake rattles are inserted through the f-holes into the interior of the violin body for a variety of reasons. A quick review of the literature (i.e., a Google search) turns up some pretty interesting bits of folklore … or practical solutions:

It forces a softer touch. “When I was a small boy playing the fiddle, my dad gave me a rattlesnake tail to put in my fiddle! I wondered at the time why he did this? Only to find out later if you are sawing too hard, you could hear the buzz of the rattles. The smooth playing produced a sweeter sound and the tail didn't buzz.”

Channel God into your music. “The snake is the bad one in the Bible, and creates all kinds of noise in our lives. It's better to play with the grace of the Lord’s gift, than to beat the fiddle to death trying to play it! If you put a rattler's tail in your fiddle, listen for the buzz. If you hear it, just take a deep breath and look up! Play it again, you'll feel better and you won't hear the buzz, and that fiddle under your chin will make you and everyone around you feel relaxed and happy!”

Who needs a tambourine? “Alan Jabbour, retired field researcher for the Smithsonian (and the guy who collected many of those great recordings!) has a rattler's tail in his fiddle. He says it is to lend ‘a rhythm section’ to his playing. Now, I don't know when he is doing a dance that anyone can hear it (although, he does amplify, now...) but when he plays live or on some of his recordings you CAN hear the swishing of the dried tail inside his instrument!”

Sweeter sound, and vermin-free. “I read that some believe it ‘sweetens’ the sound of their instrument. And recently someone told me that mice like to enlarge the f holes in a violin if the violin is left lying on a table at night. But if a mouse jumps onto the violin and hears the rattle inside, it will get scared and go away.”

Better than a vacuum cleaner. “About those rattlesnake rattles in a fiddle. Ok, so the other night I finally poked one into my fiddle after reading that they are supposed to improve the tone, keep spiders from building webs, etc., and what do you think! The next day I notice that a big ball of lint, fuzz, dust and cobwebs had been gathered up by the sweeping motion of the rattle as it wandered around the inside of the fiddle. There might be truth to that bit of folklore after all!”

More cleaning tips. “One account is that the rattle settled the dust in a mandolin, providing a deeper clarity of sound. Fiddler Bev Conrad, experimenting with a rattle in her fiddle, removed it the next day to find the rattle dust-coated­–a big ball of lint, fuzz, dust and cobwebs had been gathered up by the sweeping motion of the rattle as it wandered around in side of the fiddle.”

Even though the Powhatans didn’t have violins per sé … “The act of keeping a rattle in a musical instrument as an amulet to ward off evil spirits, especially for people steeped in superstition before their arrival to this country, could easily have derived from their own volition … learned from Native Americans as early settlers adopted other natural remedies.”

It’s an outdoors thing. “This particular practice had to begin prior to the 1900s when the fiddle was considered to be the Devil’s instrument. Therefore, the fiddle was not allowed indoors but was hung in the bar or on the porch as a compromise for what was useful to get the work done at corn shuckings and the like.”

It’s what the cool kids did. “Could it just be that someone did it because they thought it was cool and wanted to add some mojo to their instrument? And everyone followed suit because they wanted to be cool too? That kind of thing happens all the time in our modern society; why can't we allow ourselves to think that it happened in past generations similarly?”