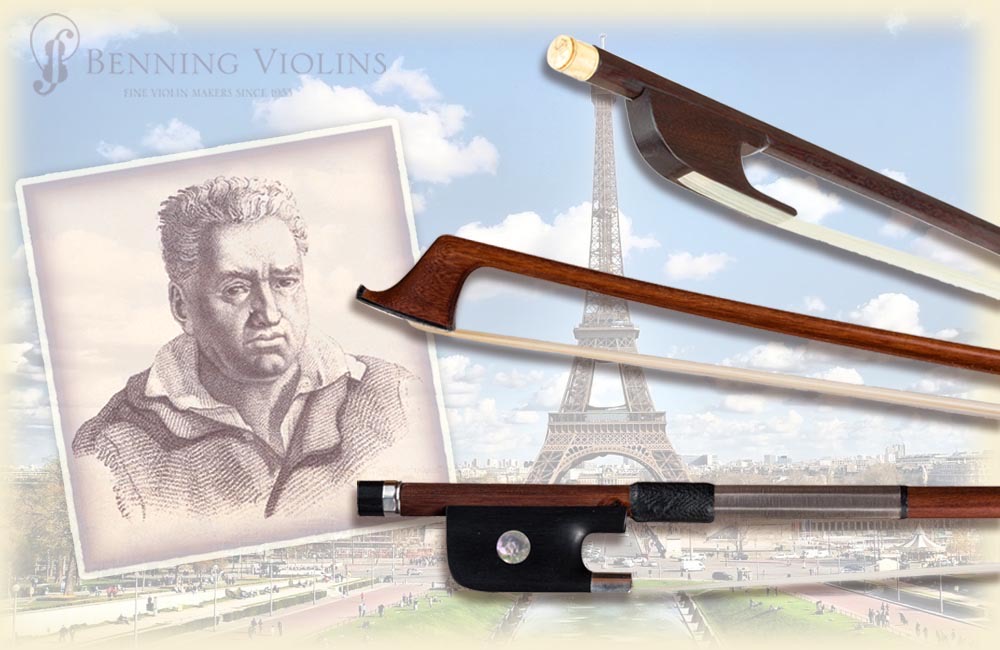 While considered subservient to the violin, the bow rose to much greater importance in the confluence of Tourte, skilled violinists, and the French Revolution.

Frenchman Francois Tourte is widely credited with inventing the modern violin bow, in almost universal use today by violinists of all levels of ability. But given he worked about 200 years ago (he lived from 1747 till 1835) – while fine stringed instruments existed before that, including those of the master Stradivarius, who produced his violins, cellos, and bass instruments in the 17th and 18th centuries – it begs the question: what came before the Tourte bows?

It turns out there were different versions of bows, largely used for different styles of music. According to a scholarly article on Prism/Scholarslab, a crowdsourcing interpretation website for educators, a shorter version bow (considered French) was used for dances and other social events; this style had short musical phrasing, therefore the bow was made for that. Italians preferred a longer bow fit for longer melodic lines, such as you might hear in a sonata; the Italian composers’ sonata da chiesa genre, with largo preludes and an allegro finale, would be a good application of the longer Italian bow.

Tourte standardized the length of the bow, to 74 to 75 centimeters. But the changes he brought about did not end there. He used more wood in the tip, a heavier frog for balance, and he introduced the spreader block. This latter innovation creates a flat ribbon with the bow hair. The screw and the end of the bow moderates the hair tension.

Another Tourte innovation was to use Brazilian pernambuco wood. This type of wood, when exposed to heat, can be bent to the optimal shape for bowing a stringed instrument. Previous bows where made by carving wood to the shape rather than a bent-wood process. And the Tourte bow was bent in the opposite direction than its predecessors, a concave dip that tightens and extends when pressed downward.

To be fair, it is believed that Tourte was coalescing various bow components seen in the works of other luthiers and archetiers (bow makers) at the time. But from a musical point of view, he opened up a whole new world for players. Today fine stringed instrument bows crafted by Tourte himself can be found for sale at higher-end violin shops.

An historical anecdote (i.e., not confirmed with scholarly evidence) is that the famed late 18th century violinist, G.B. Viotti was friendly with Tourte. Viotti’s playing reportedly placed demands on the bow that only a Tourte bow could deliver.

Another historical footnote, which might explain why the Tourte bow achieved universal popularity: The French Revolution of 1789 dissolved the courts of the French aristocracy. Having lost their patrons, the violinists of the day fled the country and went on tour to earn a living. Composers that included Beethoven saw those performers and began writing music for violinists who had a broader range – all thanks to the Tourte bow.

One of the more interesting, well thought out essays on the topic of #Stradivarius instruments and their sound.… https://t.co/52PIkXipzO

Nathan has come a long way from apprentice to journeyman. He's even learned to make a cello front float in the air… https://t.co/xPgFaTe57q