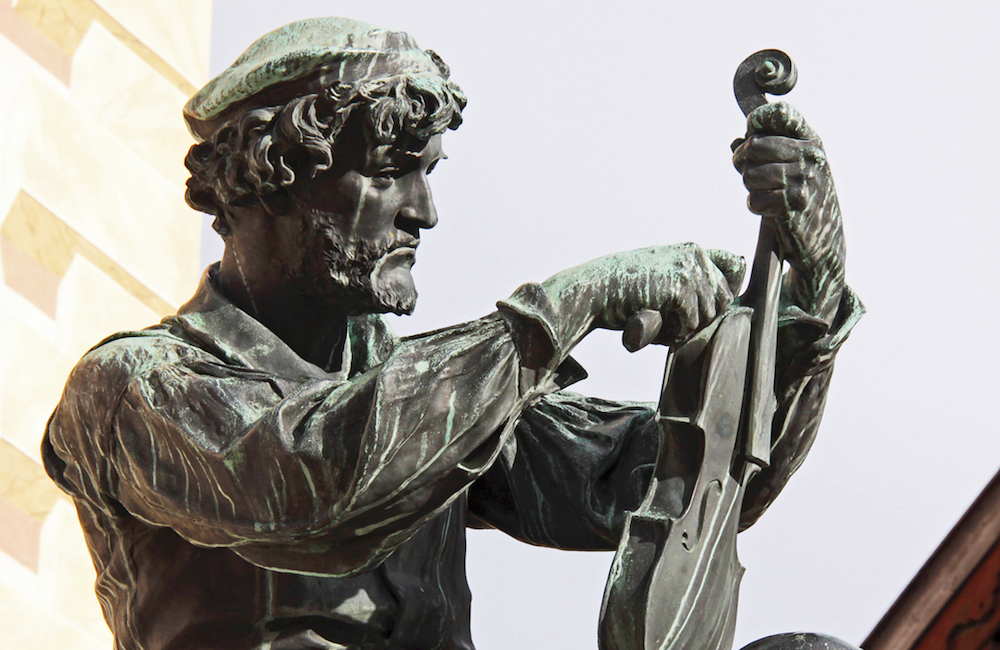 Austria’s von Trapps might have a movie made about them, but the musical contributions of the Klotz luthiers are celebrated with a statue and a school.

The Catholic Church, as well as with many other Christian denominations, has a, shall we say, evolving history with the use of instrumental support of liturgical music. The chants and polyphonic a capella style are considered the original, and therefore most pure, expression of praise and worship.

So how is it that a statue of Mathias Klotz, patriarch of the Klotz family of violinmakers, stands prominently outside the Church of Saint Peter and Paul in Mittenwald, Germany? The statue was erected in 1890 and managed to survive two world wars.

The Church eventually has come to embrace, in fits and starts, organs and trumpets and flutes and, yes, violins, violas, cellos, and the stringed bass. Oddly, the bassoon was among the earlier instruments deemed acceptable as all types of instruments made their way from the secular to the sacred.

But the reason Saint Peter and Saint Paul so honors the first luthier of Mittenwald may be because Klotz saved the town from economic disaster. After centuries of being a market town a switch to Bolzano (both situated between Venice and Augsburg) devastated the local economy in one fell swoop. It was in 1679, when Klotz was 26 years old.

The son of a tailor, Klotz had been studying violin making under renowned luthiers Nicolo Amati of Italy and Jacobus Stainer, a German, although some historians say evidence thereof is thin. So he returned in 1684 to the place of his birth, which happens to have a good supply of premium tone woods from the nearby Karwendel mountain region. Still near trans-Alpine trade routes, both supplies and customers were easy for him to access.

Mathias Klotz continued working at his storied violin shop through much of his life, living to the age of 90, producing fine cellos, violas and violins. But that was the beginning of what turned out to be eight generations of Klotz luthiers, the last (Hans Klotz) having died in 1988.

And while it was this first Klotz luthier who established a tradition, it was his son Sebastian (1696-1775) who was more skilled at the craft. Surviving violins made by Sebastian are considered the most valuable of this remarkable family. Still, the Sebastian Klotz violins, and those of his children-protegés, come in a range of aesthetic and dimensional (length of body, height of ribs) variation. The common characteristics are a high table, curved peg box, and lavish baroque scroll.

The creativity and productivity of the Klotzes led the state of Bavaria to establish, in 1856, the region’s official school of violinmaking (Staatliche Berufsschule Mittenwald), which today offers a full-time, seven semester vocational training and degreed program in a range of instrument making (violins, bows, plucked instruments, woodwind instruments, and brass instruments).

No longer must the priests and monks chant a capella (unless they want to). Mittenwald meanwhile resounds with the sound of music from all those student luthiers aspiring to be like a Klotz.