Violins in the Work of Artist Marc Chagall 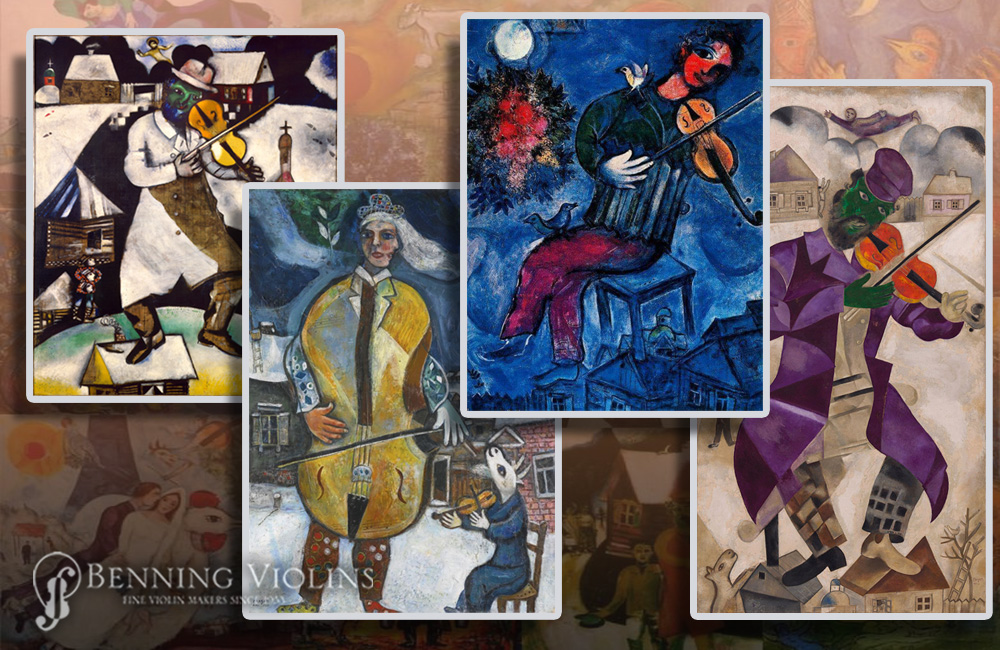 The fiddlers of Chagall’s childhood made a life-long impression on him. As do his music-inspired paintings today in prestigious galleries across the globe.

A recurring motif of the art of Marc Chagall (1887-1985) was stringed instruments, usually violins. Why was this?

Various art historians give us some clues. One is that the fiddlers he depicts evoke the joyous era of his childhood growing up in Vitebsk, Russia (now Belarus), which at the time was predominantly Jewish. The violin and violin music were ever-present in the celebrations and everyday life of the town’s inhabitants.

The violin also happens to be a recurring theme in the work of Pablo Picasso (1881-1973), a contemporary and friend of Chagall. Both were cubists as well. Why not share something as universal as a violin as a theme?

But each piece of any artist really should be considered unto itself, apart from other work. There is a reason for every painting to exist as a unique expression, no? These are major pieces by Chagall that achieve their own voice and story:

The Fiddler (1913). Newly established in France at the time, the painter evokes an image of his native Russian village while his subject, the man floating over the village, creates the music to accompany key life events: birth, marriage, and death. And while the musician appears to have the dress of men in his native religious sect, the Chabad-Hasidim, the buildings in the painting bear the steeples holding high the Christian cross. It’s the tug-pull of contrasts that pervade much of Chagall’s work. Yet it seems the creation of music reigns supreme.

The Green Violinist (1924). Analyzed as a picture of change – he and others moving on from the village of his origins, of shifting political structures (tsars to communists, rural to urban, etc.), and of the shifts following the Great War – the violinist floating above it all represents traditions as well as the happy memories of where they came from. Chagall’s floating fiddlers and violinists, in particular The Green Violinist, were the inspiration for the 1964 hit musical, Fiddler on the Roof.

The Blue Violinist (1947). Le Violiniste Bleu refers to the player as a violinist, not a fiddler, which provides a clue as to the path of Chagall’s own life. Born to the shtetl in Russia, rural fiddlers were musicians of the streets, synagogues, and celebration halls. A violinist plays in orchestras, which Chagall knew then from years of living in Paris and, during the War, New York. The player himself looks young, fresh, and doe-eyed, and perhaps the reason is that his future looks bright – perhaps the reason the chair he sits in appears to be floating over the rooftops (another recurring Chagall theme).

The Cellist (1939). A most-mystical piece, the cellist’s cubist face looks both out and to the side, the latter of these at a diminutive goat, seated and dressed as a human, playing what might be a ¼ violin. This is Chagall’s version of escapism, back to a time before the outbreak of World War 2, back to the fantasy (if not reality) of his Russian childhood. In 1939 he escaped France and advancing German troops to New York.

Related, a later Le Violoncelliste: By this point in his career and life, 1964, the recurring theme of music is all but essential to his oeuvre. This piece melds the head of the cellist with the body of the instrument, as the cello obscures the physical body while the player’s visible hands and smiling face seem to be delighted in the creation of the music.

Chagall lived a long life, itself an accomplishment given the wars waged in Europe where he was born, and atrocious genocide aimed at members of his own creed. Art and Chagall endured, as does the music they celebrated.