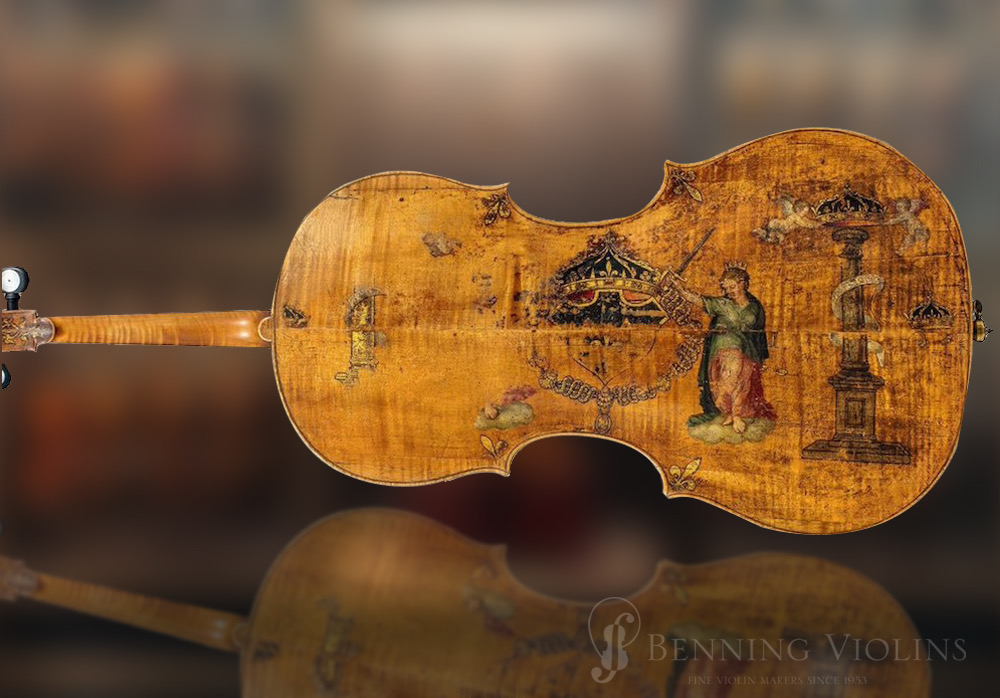 Stradivari is known for the greatest violins, but the likely inventor of the modern violin was Andreas Amati. French royalty deserves some credit as well.

The story of the Amati family of violin makers is closely intertwined with another, historically prominent clan: that of Catherine de’ Medici (1519-1589), the Italian noblewoman, queen consort of France, and mother of the French kings Francis II, Charles IX, and Henry III.

This was a time when the original Amati luthier, Andrea (1505-1577), essentially invented the violin in the form we know it. The Amati violins preceded Stradivari, Guarneri, Stainer and others for whom a greater body of work survives to this day. The story of the successive three generations of Amatis is one that emphasizes the strong relationship between the royal courts of Europe and the development of the fine violins, violas and cellos we know today – and the precarious place these exquisite instruments occupied as dynasties fell to revolutions that overturned the monarchies.

Andrea Amati essentially created the “violin family” –which includes the violin, the viola, and the cello – standardizing the evolution of stringed instruments from the medieval fiddle, the vielle, lira da braccio and rebec. Other luthiers were his contemporaries (the families Micheli and Bertolotti da Salo), but Amati had an important customer early on that propelled his instruments, and the family legacy, to fame.

(It bears noting that the evolution to the Amati violin form is subject to some debate. Some Amati instruments survive to today while evidence of other versions of the violin exist only in paintings and church frescoes. The depictions of those other versions from that time have only three strings and an oval-ish body, unlike the hourglass-with-cutouts form from Amati that has defined the appearance of these instruments for 500 years.)

Today, the auction house Sotheby’s has said about the Amati instruments that their “brilliance raised the status of the violin from a farmhand’s entertainment to an embellishment fit for a royal court.”

Indeed they did. The luthier Amati had made the earlier, three-string version of violins up until a point. But around 1536, when he would have been about 30 years old, it is believed (through thin but convincing evidence) that his relationship with the French court began with 4-stringed instruments in the form that Amati devised. The first cello, created by Amati, was called “The King” and made in 1538. This is around the time when Henry II ascended the French throne. Henry’s mother, Catherine de’ Medici, commissioned an entire ensemble of 38 instruments in 1560 from Amati.

Andrea Amati had two sons who were luthiers, Antonio and Girolamo, and they were succeeded by Girolamo’s son Nicolo, who is credited with improving on the violin in ways that created a powerful tone (referred to as the “Grand Amati”). Nicolo’s son, Girolamo (aka, Hieronymus II) was the last in the line of Amati violinmakers, living until 1740, a full 200 years after his great grandfather made the name synonymous with fine, royalty-worthy stringed instruments.

All dynasties fall eventually, including that of the French aristocracy. Of the 38 instruments commissioned by Catherine de’ Medici, few survived the French Revolution of 1789, a time when vestiges of both wealth and the Church – art, buildings, and lives – were destroyed. Surviving Amati instruments are highly prized and largely kept safe in museums, where common people can see them and study the journey of simple fiddles to fine instruments – all attributable to a visionary luthier of the early 16thcentury.