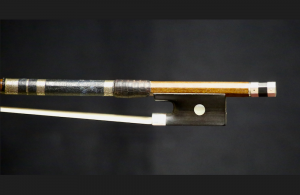 Description: This is a truly remarkable violin bow by the celebrated maker Jean “Grand Adam”. (1823 – 1869) The most talented of the Adam bow makers, Jean "Grand" Adam was born in Mirecourt and learned the craft from his father, Jean Dominique. Adam worked with his father until 1842, at which point he moved to Paris to work for J.B. Vuillaume. Adam's early bows, which illustrate his precocious skill, have rather high heads and Tourte-style frogs. His Vuillaume bows are more Parisian in style, with metal underslides, and bear a strong resemblance to the work of François Xavier Tourte. Bows from Adam's Paris career number fewer than those he made in Mirecourt, but it is not always possible to discern his work among the many bows made for the Vuillaume workshop during the period.

In 1853 he returned to Mirecourt and set up his own shop, where he turned to Peccatte and Simon models for inspiration. Many bows from this period are unbranded. In general, 'Grand' Adam bows are made to a superior standard and are highly sought after by players for their Tourte-like sound quality.

This bow is in virtually mint condition at this time. The original open trench frog comes with this bow but is not mounted at this time. A later frog and button have been fashioned for the bow to make it playable for modern violinists.