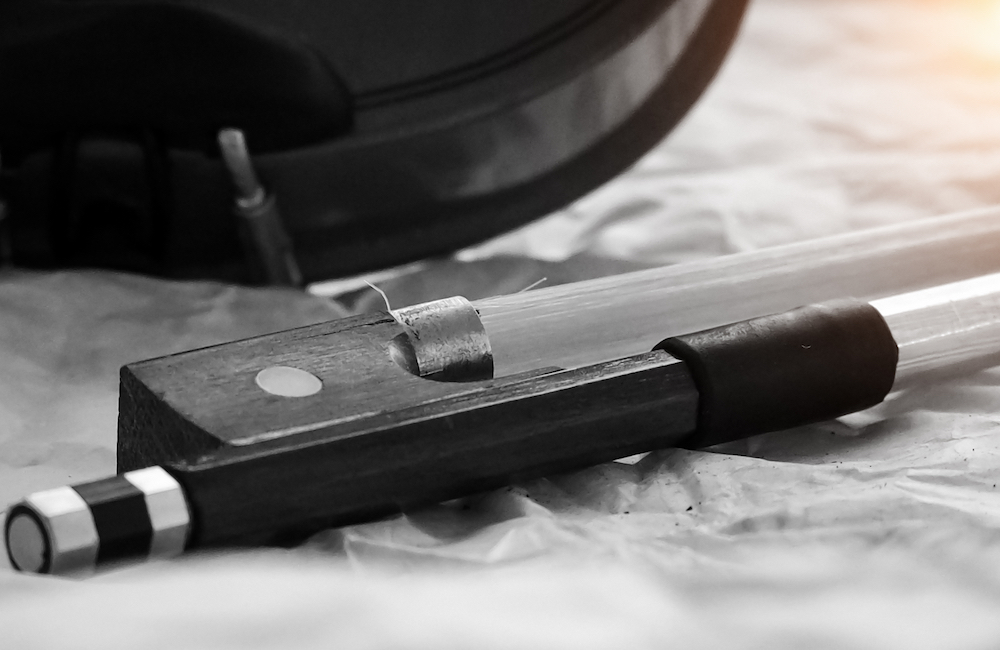 The smaller of the two parts of stringed instruments, the bow, is remarkably complex and made of several parts, historically derived directly from nature.

To understand the parts of the bow used in stringed instruments – in Western music, the violin family (violin, cello, viola, bass, and the viola da gamba) – it helps to understand what is provided by nature. The bows both ancient and modern are an assembly made of animal, vegetable, and mineral origins.

But lovers of music also have to acknowledge that this essential component of stringed instruments, the bow, are largely derived from cultures further east than Europe, and from a people who were better known for war and conquest than the music chambers of British, French, and Russian royalty.

While stringed instruments that were plucked and strummed by hand go back quite far in time, it wasn’t until around the 10thcentury CE that bows are evident in the archaeological and historic records. And there, they were first seen in Egypt, India, Greece and Anatolian civilizations. In all likelihood the stringed bow originated with the horse based-cultures of Central Asia, particularly the traveling Mongolians.

The horse component of this history is important and an enduring part of what makes up the bows of today. Synthetic materials are now used, particularly with student violin bows that accompany affordable student violins, but the hairs drawn from white Mongolian Stallions are still the gold standard for stringed instrument bows. Coated in rosin to increase friction, those tightly-set hairs are critical for making sound.

But the bow is more than hair. The other materials used for key parts are:

Stick: Traditional bows are made of wood. The absolute favored type of wood is Pernambuco; grown in Brazil, it nonetheless is in increasingly short supply due to the species of tree becoming endangered (it grows slowly and has been overharvested or burned). In is place are Brazilwood, Ipe (Tabebuia) and the surprisingly well-received synthetics, carbon fiber and fiberglass.

Frog: This is the part that holds the horsehair to the stick. Functional parts are typically ebony, but decorative flourishes made of ivory, tortoiseshell, mother of pearl and abalone shells are applied (the latter of these two considered more sustainable). The frog also has metal components, in ascending order of value starting with nickel silver, silver and gold. The grip portion of the frog is made of silk, wire, or whalebone while the small area where the thumb makes contact with the frog is made of either leather or snakeskin. Believe it or not, ancient mammoth ivory is sometimes used for the tip plate of the bow (evidently there are an estimated 10 million extinct-yet-preserved wooly mammoths emerging from melting permafrost and glaciers), although bone, elephant ivory (discouraged by international law but present on legacy bows), metal and silver are also used.

What should be clear is that time and how music is produced do not stand still. The success of carbon fiber bow sticks – some insist they work better performing in outdoor humidity – suggests the future will bring changes that ultimately enable better music.

Student Violin Outfits: How to Choose Investing in a quality #violin or #viola outfit for a student player could be… https://t.co/JfTXeCU8Cm

A #violin coming into being, foreground, and the #violinmakers in the background that repair and restore #violins,… https://t.co/1DSboHqKWL