Pablo Picasso and the Violin 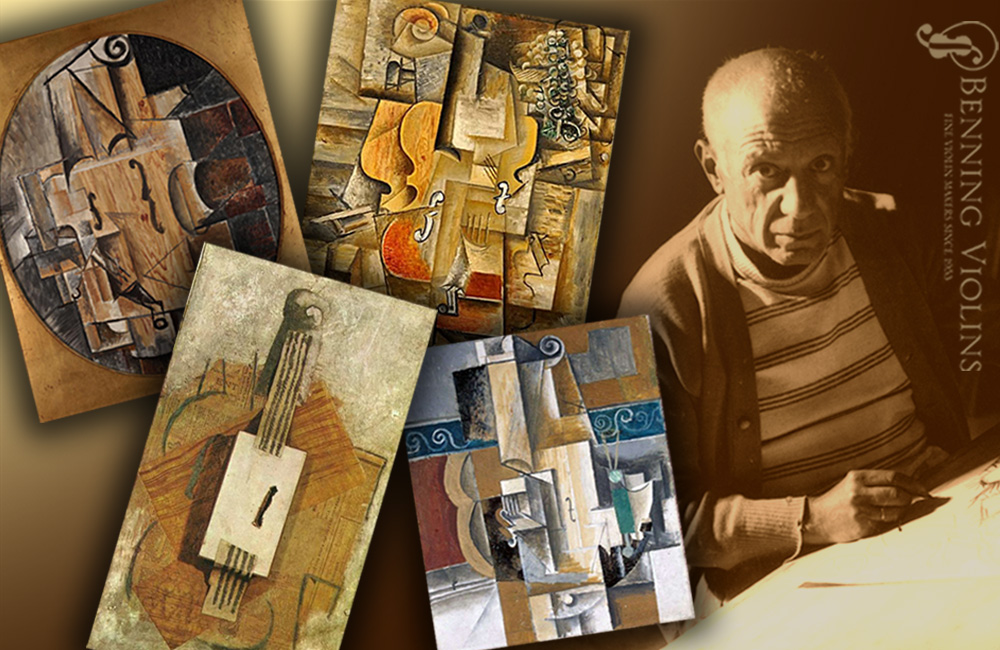 The crossover between visual and performing arts is not uncommon. But in his championing of Cubism, Picasso found his inspiration to paint in violins.

Art historians know all about Picasso. They understand his oeuvre (“Cubism,” primarily), his various periods (Blue, Rose, Analytic Cubism, Synthetic Cubism), and the fact he frequently incorporated violins and guitars into several of his paintings.

But not everyone is a student of visual art. If that’s your jam, or more accurately a lack thereof, this article is for you.

First, why all the disjointed faces and objects in his Cubist works? Well, in simplest terms it’s as if his eye took a picture of things (faces, violins, grapes, bottles, etc.) from different angles, then he pasted those pictures into a collage. The idea is to represent something in a more complete, multidimensional way – from different perspectives – within the confines of the two-dimensional medium of a canvas.

Next question: Where do violins, and more broadly, music fit into this? The fine stringed instruments are variously depicted with guitars, humans, bottles, and grapes in several Picasso works. But don’t expect to see a complete violin – he really only painted parts, usually the f-holes, sometimes the headstock, the curved body, and parallel lines meant to represent the strings. This is of course part of how Cubism works. Art historians say his use of violins are to evoke less about the instrument and more about the sounds, the movement of music that brings a type of life to the painting.

It bears noting that this then disqualifies Picasso’s work from being considered abstract. It might require study to find the objects, or parts of objects, in his work. But those violin parts are there, not some splotches of paint that evoke more of a mood than an actual Stradivarius.

Some of the most recognized Picasso works featuring imagery of fine violins are:

Violin (1911-1912), now in the Kroeller-Muller Museum in Otterlo, Netherlands

Violin and Grapes (1912), now in the Museum of Modern Art, New York

Three Musicians (1921), now seen in the Philadelphia Museum of Art: the other two musicians in the painting seem to be holding a clarinet or recorder, and a keyboard instrument, perhaps a version of an accordion.

It should be noted that Violin and Candlestick (1910), now in the San Francisco Museum of Modern Art, was painted by fellow Cubist, Georges Braque, whose work is very similar to that of Picasso. The two considered themselves colleagues. Another Cubist who incorporated musical instruments was Jean Metzinger in his Violon et Flute (1918).

So if you’re more oriented to music, there is some indication that Cubism presaged or is otherwise represented in jazz phrasings (see Parker, Coltrane, and Monk). The balletic composition of Erik Satie, Parade (1917), is arguably a Cubist work. Some types of architecture from the 20th century – from Le Corbusier to Libeskind to Gehry – trace to Cubism. The iconic Gehry concert halls in Los Angeles (Walt Disney) and Chicago (Prizker Pavilion) easily relate to Picasso’s work.