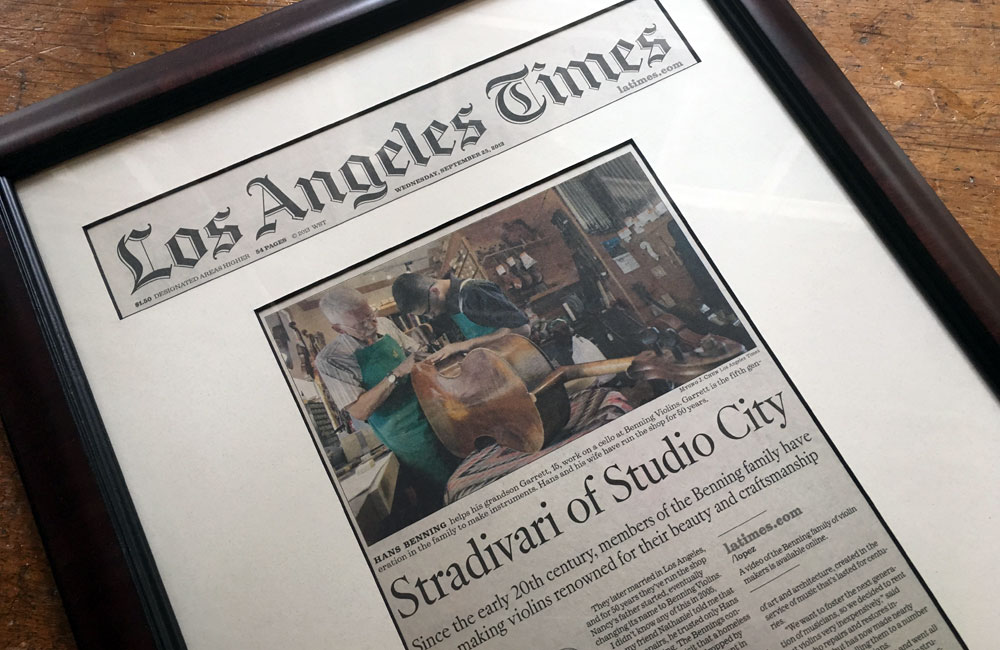 LA Times writer, Steve Lopez, has featured the Benning family, fourth generation violinmakers and owners and operators of Benning Violins, a mainstay Los Angeles violin shop, in his recent column.  Lopez, a celebrated columnist and author, writes of resident master luthier Eric Benning, his parents, grandparents and his young sons, the latest generation of makers to craft fine violins, violas and cellos in the storied shop.

Los Angeles, CA September 25, 2013 – Setting his discerning eye on the next generation of violinmakers to produce fine violins, violas and cellos in LA’s most storied violin shop, Steve Lopez has featured Benning Violins in his September 25 column.  Entitled “Stradivari of Studio City”, the story covers the exploits of the three generations of the Benning family of violinmakers that currently run the mainstay shop on Ventura Boulevard.

“Our entire family is deeply honored to receive the attention of a writer of Steve Lopez’s caliber,” said Eric Benning, resident master violinmaker, father of young violinmakers Garrett and Nathan and the son of noted makers Hans and Nancy.  “Like most Angelenos, we look forward to reading Steve’s incredible insights and observations about life in Los Angeles. We would never have believed before now that our family’s story would be told in his column.”

Lopez had become acquainted with Benning Violins through his well-publicized work with Nathan Ayers, a schizophrenic homeless musician of some talent who was living on skid row in Los Angeles. The story was first told through a succession of columns.  Lopez authored a book about his relationship with Ayers entitled "The Soloist: A Lost Dream, An Unlikely Friendship, And The Redemptive Power of Music."  The book was later adapted for film starring Robert Downey Jr. and Jamie Foxx.

“Nathan Ayers used to drop by the shop with his violin,” remembered Benning. “After he acquired a cello with the assistance of Steve Lopez who was valiantly trying to rehabilitate Nathan, Lopez would drive the cello over to our studio for service.  Steve has now been selflessly performing this task for many years.”

According to Benning, Lopez noticed Benning's young sons working on instruments under the supervision of their grandfather, Hans, on one of his trips to the shop, which moved Lopez to tell their story.

Lopez’s column tells of four generations of Benning violinmakers, beginning five generations ago with Carl Becker Sr., the musical patriarch of the Becker dynasty that includes the Benning family. Becker Sr. was a celebrated violinmaker from Chicago who taught the craft to Benning’s grandfather, Paul Toenniges.  Toenniges opened Benning Violins - then known as Studio City Music - in 1953. The family has been running the shop ever since.

The column, according to Benning cousin and General Manager Laura Phillips, “is classic Steve Lopez”.

“Steve has a way of shining the light of depth and romance and color on people and things most people might consider mundane,” she observed. “Not that this is mundane.  We at Benning have always felt blessed to play our small role in the beautiful and uplifting story of Steve and Nathan Ayers.  That was always enough.”

A fine #viola crafted in 1960 by #violinmaker Henri Viret Viola in Buenos Aires, #Argentina. It possesses a rich, e… https://t.co/sT45i6fBMC