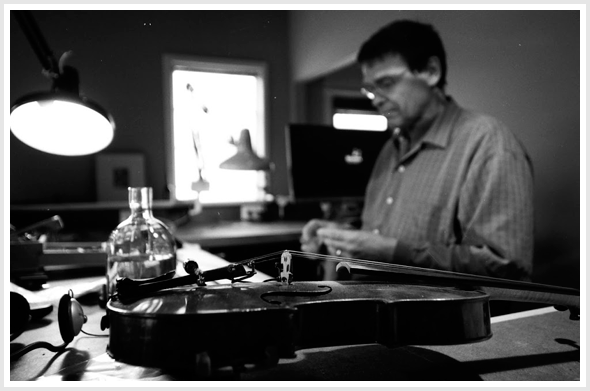 Los Angeles, CA December 20, 2012 – Distinguished Los Angeles violin studio, Benning Violins, widely recognized internationally for both their selection of old, fine violins, as well as those that are crafted in house, has announced a resident partnership with master bowmaker Ole Kanestrom. According to violinmaker Eric Benning, while Los Angeles is home to many outstanding luthiers “there is a real need for a bowmaker of note residing and crafting fine string instrument bows in this city.”

While the Benning family name has been synonymous with the making of fine, master-crafted violins, violas and cellos for three generations, beginning with Paul Toenniges followed by Hans and Nancy Benning, the Benning studio does not produce bows. They do, however, sell fine bows as well as restore and repair them.

“I originally put out the call to see if there was a bowmaker who wanted to come and work at our studio,” said Benning, himself a recognized modern master violinmaker. “We get so much bow repair work that a significant amount of time is spent by Hans and me just in the repair and rehairing of bows. I was hoping to attract a talented bowmaker but I wasn’t expecting someone of Ole’s caliber to answer the call.”

Kanestrom, who studied the French school of bowmaking under the illustrious eye of bowmaker Charles Espey and making and restoration under bowmaker Paul Siefried, crafts his own line of fine bows widely sought after by high-level players. Concert and recording artists like cellists Adam Grabois, Lynn Harrell and Chris Finckel, violinsts Jason Horowitz and Bruno Eicher, as well as violist Susan Gulkis Assadi all own and play Kanestrom bows.

According to Benning, the fine craft of bowmaking is experiencing a renaissance and many modern violin bows, as well as bows for cellos and violas, are on par with the greatest French masters like Eugène Sartory and François Tourte. Aside from consistent fine quality, says Benning, the modern masters need to be able to source extremely fine wood for bows.

“Ole Kanestrom is a modern master,” says Benning. “Bowmaking is a craft on par with violinmaking; it is as complex and mysterious. Ole works with the very best and has already made a name for himself internationally. We are delighted to be carrying his bows for sale in the studio and we are pleased that he will be doing new making and repairs in our studio.”

The arrangement will see Kanestrom spending up to two weeks at a time between Los Angeles where he will set up shop and his home base in Washington starting in February 2013. Appointments for bow repairs, restorations and commissions can be made by calling Benning Violins or by visiting their web site.