Sears, Roebuck & Co. and the Violin 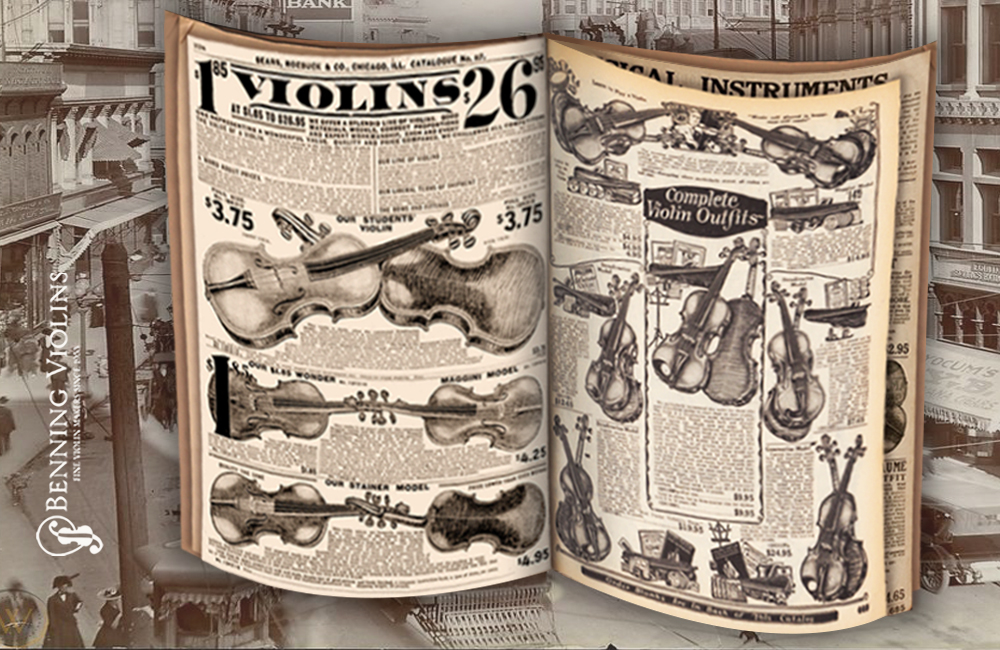 Almost everything was sold via the Sears “Wish Books” of the 20th century. Worth noting is inexpensive instruments that have long been available – and valued.

Fundamentally, shopping online via Amazon in the 2020s is an awful lot like shopping by way of the Sears catalog in the early 1900s. The consumer then and now looked for what they wanted – or browsed for things that caught their eye – and placed an order with payment upfront. That order was then and is now delivered to their doorstep.

Items you could buy, then and today, included inexpensive violins for sale. Also known as “student violins” – and back in the day of the Sears Roebuck catalog (Roebuck’s involvement in the business was short lived although the name lasted longer than the person), they sold “tenor violins” which were in fact violas – they sold for as little as $2.95. There were higher-priced models, “High Grade Violins” as the catalog copy read, priced at $29.95.

And what’s noteworthy about those violins is they carried the names of history’s greatest luthiers: Stradivarius, Maggini, and Stainer among them – always with the phrasing to the effect of “modeled after the celebrated Stradivarius violin,” lest there be any false representation (which didn’t become illegal until the 1914 Federal Trade Commission Act – and besides, “modeled after” is a fair enough warning, although the labels inside the instruments didn’t provide that detail).

But marketing and distribution issues aside, the fact that violins were popular enough to be sold to families in rural Kansas via their Sears catalog is indication of something more. This was a time preceding television and for most, the radio. Playing musical instruments was the most accessible forms of musical entertainment, especially outside cities, on a daily basis. One only went to the theater for special occasions, if there was one within reachable distance.

Writer Dina Gold penned in Moment Magazine about the phenomenon in both Europe and the US prior to World War 2 (“The Stars of David that Aren’t,” tracing how vintage violins of the era had inlaid mother-of-pearl six-pointed stars, which some mistakenly think today were violins used in concentration camps during the Holocaust):

“Advertised widely as ‘fancy violin’” in U.S. mail-order catalogs such as Rudolph Wurlitzer (started in 1856 in Cincinnati, which had a big German population), Sears Roebuck & Co, C.F. Martin & Co., Montgomery Ward and August Gemunder & Sons, these violins cost on average $8, then likely a week’s pay. Buyers could choose from a large array of patterns and designs as decoration, including statues, flags, flowers, artists’ heads, harps, swirls, eagles, Stars and Stripes, as well as four-, six- and eight-pointed mother-of-pearl inlaid stars.” ~ The Stars of David that Aren't

Today, there is not only a collector’s trade in those cheaper violins, but with the pages right out of vintage Sears catalogs themselves. For bid-prices ranging between $7 and $20, it’s possibly to buy the original pages from those “Wish Books,” as they were called. The breathless marketing copy and the illustrations are as much a glimpse into how things were merchandised at the time as well as what one can imagine life was like a century ago.

The parallels between the old Sears catalogs and Amazon and other online retail sellers holds true today. It’s possible to buy a student violin for as little as $69.99 (includes case, shoulder rest, bow, rosin and an extra bridge and strings, in the ¼ size). Given the rate of inflation since 1900 – which is a multiple of 32.66 – the original lowest priced $2.95 violin would cost $96.35 today.

From which one can conclude, at the lowest level of quality anyway, that musical instruments are as economically accessible today as they were 120 years ago.