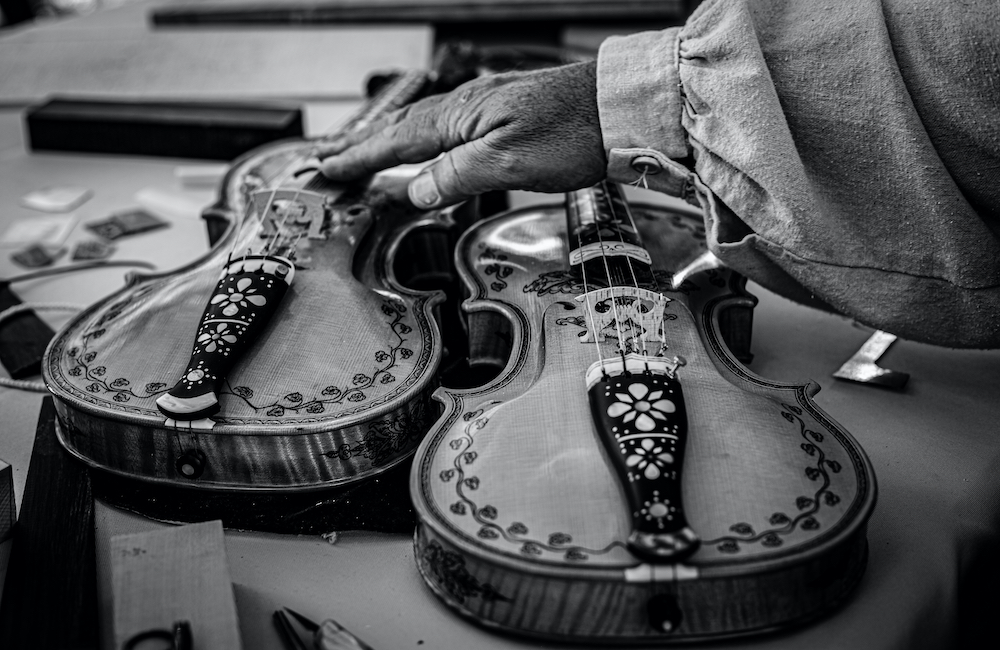 They look like violins, but appearances can be deceiving. The addition of sympathetic strings gives this Scandinavian favorite a haunting, polyphonic sound.

Every region on earth has its indigenous musical tradition and Norway is no exception. It is the country most associated with the Hardanger fiddle, used for centuries in folk music, some liturgical settings, and in a surprising number of movie soundtracks. The instruments are very Norwegian, meaning, you’re unlikely to find a violin maker crafting these fiddles in a local violin shop.

Here are six key facts to know about Hardanger fiddles:

Uniquely Norwegian for centuries – While the Hardanger arose in southwest Norway – where Oslo is, by the way – it is today considered the national instrument of the country. In its purest, truest application, the hardingfele (the Norwegian word for it) is used for dancing with the accompaniment of foot stomping. The first known Hardanger is depicted in 1651 with a rounder body – before it took the shape of a traditional violin in the mid 19th century.

OK/Not okay in church music – Folklore for a time associated the instrument with the devil and other malevolent spirits. So during a particularly religious revival period in the 19th century, the Hardangers were banned in church and in fact were sometimes destroyed. The fact they were used for fun dance parties involving drinking and rowdy behavior didn’t help. But the band played on, so to speak, outside of religious environments and it has since been used in some church musical performances and is a favorite in wedding processions.

Eight or nine strings, not four – Unlike the standard four strings on violins, the Hardanger fiddle has four primary strings (what the player bows) but has an additional four or five sympathetic strings that resonate. This gives it a droning, sometimes haunting sound in some compositions (it might be likened to the sound of a bagpipe). But the instrument can also be lively, the center of the dance, as it always was throughout the rural villages of Norway.

Intricate detailing makes them pretty – While shaped like a violin, the inlaid mother-of-pearl on the tailpieces and fingerboard immediate reveals a Hardanger. Inked in by hand on the body are floral motifs called rosings, while hand carved figureheads (typically a lion) are where the violin’s volute would be.

You’ve heard it in movies – The Hardanger is a featured instrument in soundtracks for the movies Fargo, Armageddon, How to Train Your Dragon, Dunkirk, Tales from Earthsea, and two of the Lord of the Rings sagas. Steven Van Zandt wrote it into the theme song for his TV series, Lilyhammer.

Enthusiasts keep the Hardanger Fiddles alive – The Hardanger Fiddle Association of America, appropriately based in Minneapolis, a city with a high Scandinavian population, hosts fiddle music and dance events and workshops.

The association says that there are no mass-produced Hardanger Fiddles, therefore the lowest prices one can expect for a contemporary, “good quality” instrument would be in the $2500 to $5000 range. Antique and very fine Hardangers can sell for as much as $50,000.