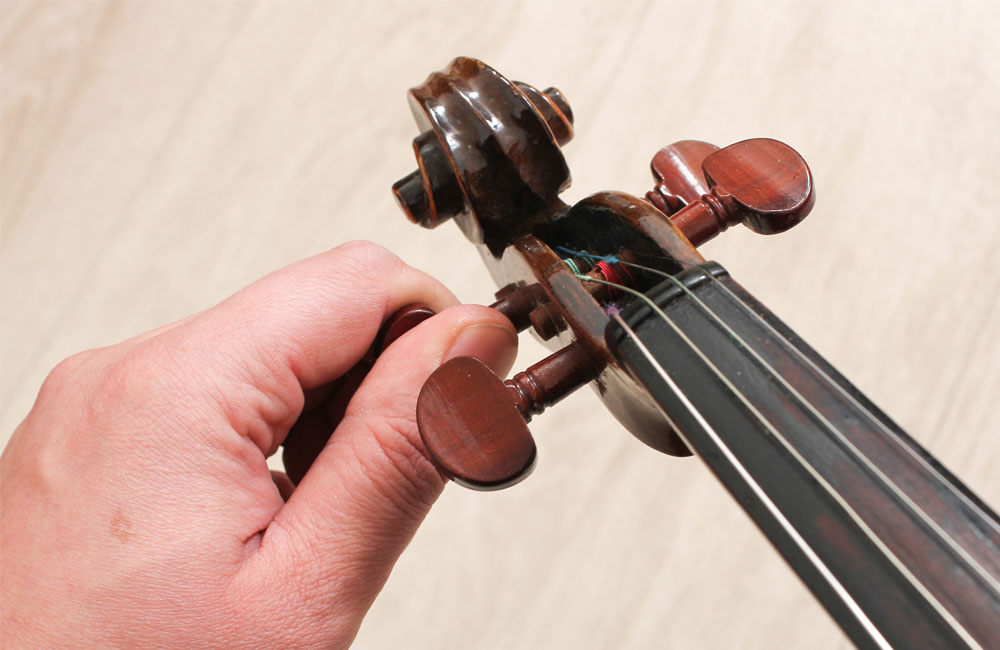 As any string player, from the beginner to the professional, knows, all music-making begins with an in-tune instrument.

For the practicing instrumentalist, tuning a violin, viola or cello is a daily task. Located in the peg box towards the end of the instrument, pegs are adjusted to tune the pitches of each individual string. Fine tuners, optional tiny knobs located in the tailpiece, allow for more subtle adjustments in pitch, especially on steel-core strings. Each of the major stringed instruments (violins, violas, cellos and double basses) has their own traditional tuning.

The violin is typically tuned so that the strings, when played “openly” or without any fingers touching the strings to the board, are G-D-A-E from left to right, or lowest to highest pitch. Traditionally the A-string is tuned to 440 Hz. The professional musician’s well-trained ear can detect ‘beating’ or the slight vibrations of sharpness or flatness, and make finer adjustments.

Though the viola is similar to a violin in size and is positioned and played in a similar manner, it is slightly larger and tuned an entire fifth lower. The strings are typically tuned to C-G-D-A from the lowest to highest pitch. The cello has the same tuning configuration as the viola, except it is another octave lower. The upright bass is tuned so that the open strings are at intervals of fourths instead of fifths (E-A-D-G). It is the lowest in pitch of the stringed instruments.

Watch the extraordinary story of #violins played in ghettos, forests & concentration camps, and of the passionate I… https://t.co/g1AIH2lCqc

Our young client, #cellist Angela Rose Padula, and her two brothers performing a clever arrangement of a #Bach Gold… https://t.co/9YTRMSSjQv