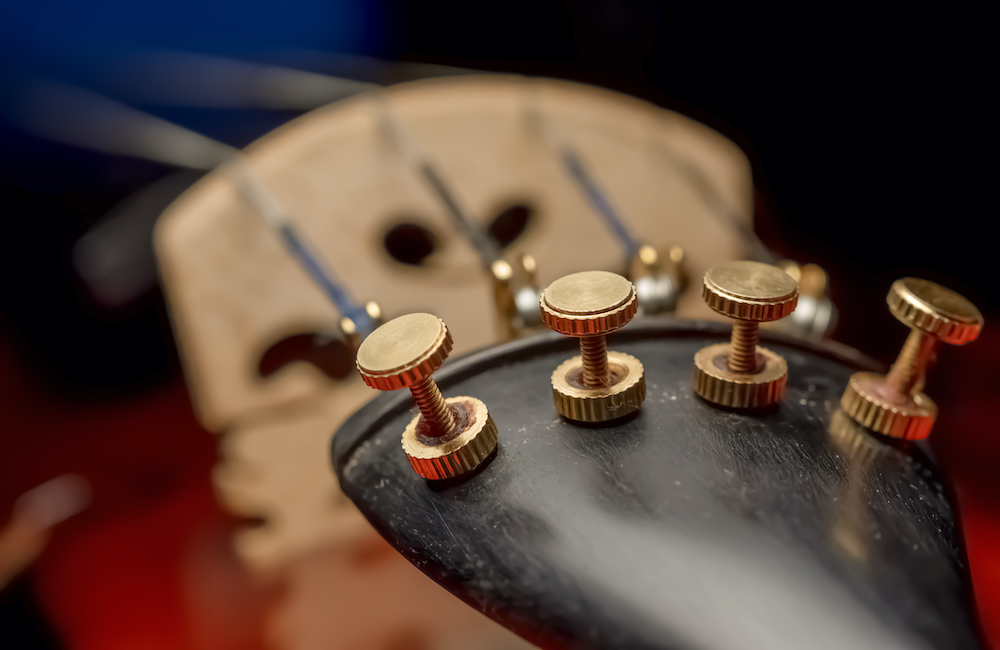 For 200 years, fine violins, violas, and cellos were tuned only with a twist of the pegs. But new kinds of strings, as well as fine tuning additions, have made for sweeter music.

On the most elementary level, even the beginner violinist understands that the vibration creating the sound of a stringed instrument is wholly dependent on the tautness of the strings.

And while the tension created on each individual string on the violin, cello, viola, and bass appears to be controlled by the pegs – the screws located on the fancifully scrolled pegbox and the top of the instrument’s neck – there is a second set of tighteners known as fine tuners. They are aptly named, as tightening and loosening the fine tuners the instrumentalist can achieve the perfect pitch. They have become mainstay accessories for violins, violas and cellos.

So, in other words, the means to tighten the strings to tune the instrument can be done at both ends.

Why two ends and not just one? A little history and a look at the physics of stringed instruments tells us why.

Today’s violins are strung with either steel, nylon, or catgut (actually made from sheep intestines). Steel and nylon are later inventions (early 20thcentury), and as with new inventions there is some stigma attached to those novel materials from “old school” players. But over time the sound quality and control players found with metal (steel) strings, as well as with nylon material, mean that players either mix string types or use all-steel or all-nylon strings as well.

It was the introduction of metal strings that brought about fine tuners. It turns out that while catgut strings were much more pliable (“stretchy”), the steel strings were not. Therefore, the existing pegs at the end of the neck were of less use as they didn’t easily change the tune of the strings. The fine tuners, however, devised in 1919 by Thomastik-Infeld, an Austria-based string and rosin producer, did enable tuning the metal strings.

At first, it was only the high E string that was attached to a fine tuner, which is located at the opposite end of the strings from the scroll, at the tailpiece. And that was initially a retrofit feature on violins that had no fine tuners in their original construction. Today, fine tuners might be made as original equipment, and for all four strings.

Why not just work to improve violin pegs to achieve perfect pitch? They are made of natural materials – ebony, rosewood or boxwood, fitted into a maple pegbox. As such they are subject to temperature and humidity, too tight under some conditions and loose under others. The fine tuners, made of metal to stretch or loosen metal strings, are easier for the player to manage and less subject to temperature and humidity.

In the most important moments – performances and auditions, for example – the ease of fine tuners is much less stressful for the player than to work with the fickle pegs. It bears noting that while most fine tuners are made of metal or carbon composites, there are very expensive fine tuners made of Pernambuco (wood). But this latter category is from an endangered tree species also preferred for bows, and they are hard to acquire for the time being.

There has never been a need to reinvent what a fine violin is and its basic functions. But the improvements that include fine tuners make them more dependable and, well, better tuned for better performances. A local violin shop will offer fine tuners for sale.

As the American virtuoso Ruggiero Ricci (1918-2012) once said, “Of course the most difficult thing on the violin is always intonation. The second one is rhythm. If you play in tune, in time with a good sound that's already high level. Those three are the main things."