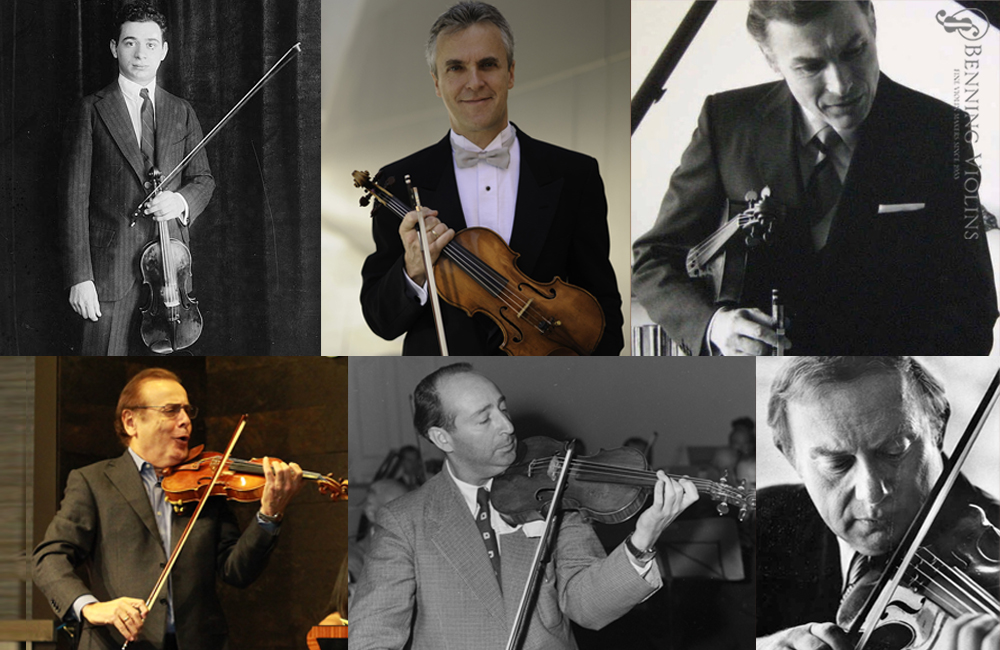 As the first chair of one of the world’s great orchestras, the LA Phil concertmasters often extend their credits by working on great cinematic scores.

The casual fan of orchestral music knows the first-chair violinist, the concertmaster, is the “number one,” the best of the violinists. They are the ones who tune the orchestra before the concert begins, shakes the hand of the conductor, and signal when it’s time for the orchestra to take a bow. It’s a prestigious position and one that comes with a top salary in professional symphony orchestras.

Another perk that often comes with the position is the use of fine violins owned by the orchestra. Professional orchestras, such as the Los Angeles Philharmonic acquire fine Italian violins by masters such as Stradivari, Amati and Guarneri. The current concertmaster of the LA Phil has performed on a 1711 Stradivarius violin, “the Kreisler”, and a 1729 Stradivarius violin, the “ex-Jack Benny”, for instance.

Sylvain Noack (1880-1953) Trained in Amsterdam, Noack was the Los Angeles Philharmonic’s first concert master beginning in 1919, the year the orchestra was founded.

Alfred E. Megerlin (1880-1941) A native of Antwerp, he first served as the concertmaster at the Vlaamse Opera and the New York Philharmonic, next with the Minneapolis Philharmonic, becoming the lead violinist with the LA orchestra in 1926.

Henry Svedrofsky (birth and death unclear) While the records are scarce, what exists mentions Svedrofsky as a conductor of the Standard Symphony Orchestra of Los Angeles from 1941 to 1947 and several other orchestras as well. Concertmasters frequently are conductors as well.

Josef Borissoff (1889-1964) The US Library of Congress lists the book, “Foundation for violin technic,” by Borissoff as published by Carl Fischer, Inc. in 1925.He is also credited for being the soloist in the premier in Los Angeles (November 1929) of “Introduction and Rondo Capricciosos” by Camille Saint-Saens (1863).

John Pennington (birth and death unclear) Pennington’s tenureas concertmaster with the “LA Phil,” as it is affectionately known today, came after his time as first violinist with the London String Quartet, San Francisco Symphony, and the Paramount Pictures orchestra. He was the concertmaster with the Royal Philharmonic Orchestra in its first post-War assemblage in 1946. Archives indicate he performed in Los Angeles under conductor Otto Klemperer in 1937.

Bronislaw Gimpel (1911-1979) From a musical family in what is now Lviv, Ukraine, the accomplished violinist came to America in 1937 as the drums of war threatened people who, like him, were of Jewish ancestry.

Sascha Jacobsen (1895-1972) Born in Finland (then a part of Russia), he attended the Julliard School in New York and is credited with making the first complete recording of a Haydn quartet. He was the concertmaster in Los Angeles in the 1950s and played the Red Diamond Stradivarius violin.

Jacques Gasselin (birth and death unclear) While officially listed in the list of Los Angeles Philharmonic concertmasters, the record of his life and performances are more Hollywood than Haydn. Working for Decca, Musicraft, Capitol Records, and Columbia, Gasselin worked with Katherine Hepburn in the move “Trigger,” playing a violinist, and recorded with Perry Como, Mel Tormé, and Doris Day, among many others.

David Frisina (1912-2000) Frisina was the first US-born and youngest (at age 28) concertmaster in the Los Angeles Philharmonic. He also contributed to 277 movie soundtracks as a studio musician. He held the position for 37 years, until 1973, but continued playing with the orchestra another five years (1978).

Sidney Harth (1926-2011) Harth was concertmaster in four philharmonics (New York, Los Angeles, Chicago and Louisville), served as a conductor as well, including at the Los Angeles Philharmonic. But perhaps his greatest enduring influence was serving on the faculty at the Yale School of Music for 17 years.

Sidney Weiss (1928) Serving as the LA Philharmonic concertmaster from 1979 through 1994, he also recorded Elgar and Walton violin sonatas, and the Mendelssohn and Haydn Double Concerti with his wife, pianist Jeanne Weiss. Both met while studying music in their native Chicago.

Alexander Treger (1948) Assuming the role of concertmaster in Los Angeles in 1985, Treger emigrated from his native Russia in 1973 and began playing with the orchestra in 1974. In one notable concert in 2008, he soloed playing the theme music from Schindler’s List in a concert of composer John Williams’ film music.

Martin Chalifour (1961) As of 2022 Martin Chalifour is in his 25th season as principal concertmaster of the Los Angeles Philharmonic. The Canadian native previously was the associate concertmaster with the Atlanta Symphony and Cleveland Orchestra. Aside from an impressive list of appointments, concerts, and conducting engagements, it bears noting he began playing at age 4 with the Suzuki method.

So, should a visitor to Los Angeles ask how to get to the Walt Disney Concert Hall, the natural response from any concertmaster would be, simply, “practice.”