The History of Rosin and Stringed Instruments 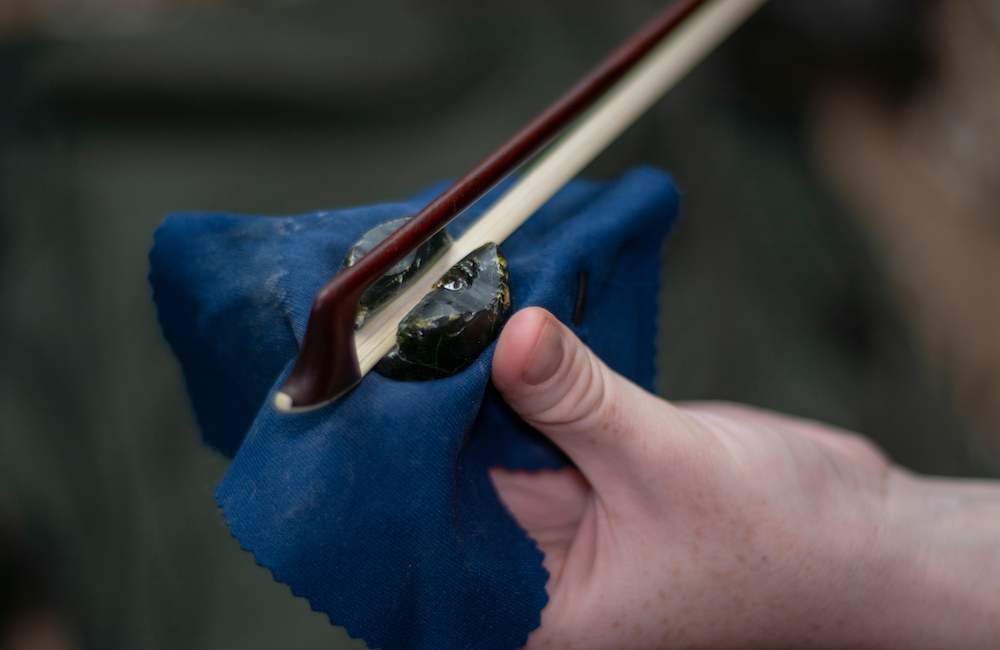 Both rosin and music produced by strings go back thousands of years. When the two came together is uncertain, but it’s easy to understand why.

It’s somewhat challenging to identify when rosin met its first bow to produce music on a stringed instrument. A Google search fails to yield definitive information on where and when that would have happened. It might be similar to where and how early humans discovered how to sauteé vegetables – fire, oil and vegetables have existed for a long time, but just when they were used in combination is elusive.

But the two basic components of this question – when was rosin applied to stringed instruments – can each be traced separately to suggest it happened a long, long time ago.

First, the history’s oldest stringed musical instrument might have also been a hunting weapon. Cave paintings in Trois Frerers, France dating back to 13,000 BC show what appears to be a use of a single-stringed hunting bow to create music.

Over time stringed instruments evolved with the addition of features, most especially additional strings, which led to the lyre, bow harp, harp and lute. It’s clear the human instinct for music drove innovation to the creation of violins, violas, cellos, stringed bass, guitars, harpsichords, pianos, and their many variations (brass and woodwind instruments followed similar paths, albeit without creating sound with friction on strings).

So where did rosin come in? We know that rosin, still produced from tree resin (not sap) as it has always been, also had many uses in ancient history. It is sometimes referred to as colophon and colophony, which refer to an ancient Greek-Turkish city named Colophon, where it was initially produced, which was part of the Ionic period in the 6th to 7th centuries BC. Derived today as it was thousands of years ago, resin turned into rosin originated from pines, cedars, firs, spruce and junipers.

Rosin had many uses then and now. It was used medicinally for healing wounds, as a sealant (think floating conveyances such as boats made from wood, and floating fiber baskets), and as a part of how the Byzantine Empire fought wars. They had an early version of something resembling napalm, called “Greek Fire,” which was a viscous liquid that could be catapulted against an invading army or navy. Rosin was both a thickener in this deadly mix as well as fuel for the fiery havoc it would create.

Given the historical relationship between music and war – to rally the troops, and sometimes to intimidate the enemy – it suggests that instruments of ancient times easily accepted the use of rosin to provide bow friction to stringed instruments.

Today’s players of the violin and all other fine stringed instruments could not function without rosin. Its application to the bow is part of early musical instruction for children as well as the concertmaster of every orchestra in the world. While the word has many applications and many actual chemical compositions, the serious stringed instrument player would do well to work with their instructor and violin makers to identify which is right for him or her.