The History of the Baryton 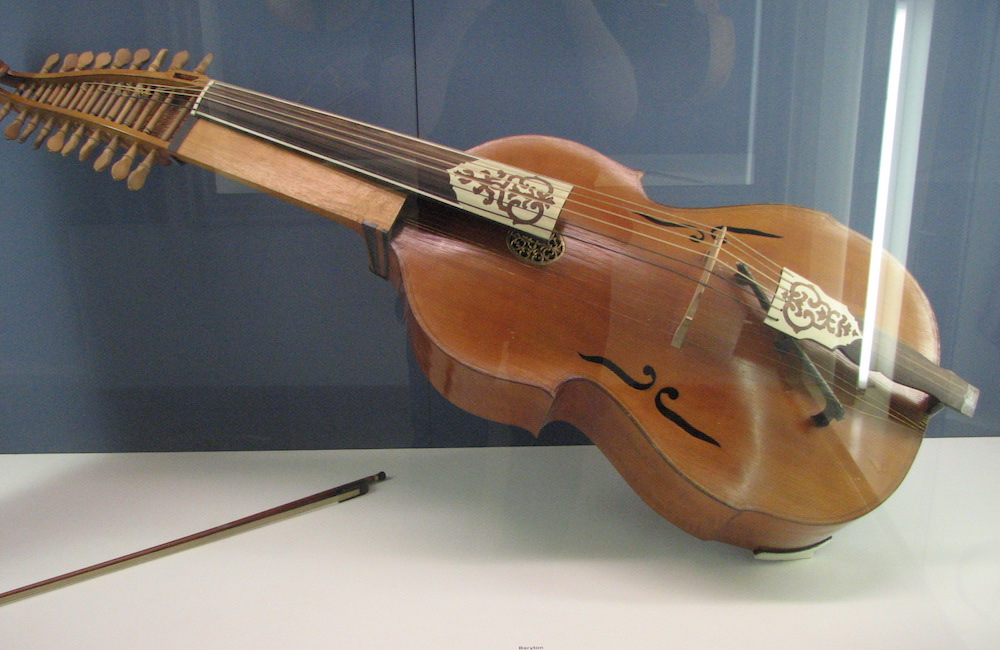 The thick neck of this obscure stringed instrument speaks to the double duty it and its players serve to produce its rich tonality. Barytons are quite rare.

The baryton, a member of the viol family, is a rare but still-played instrument in the 21stcentury. Aficionados of the music of Joseph Haydn understand its beauty and place, particularly within the 123 trios the 18thcentury composer wrote for the baryton, cello and viola. A baryton is unlikely to be found in a catalog of fine stringed instruments for sale of any typical violin shop.

But the story of this impressive looking instrument, a relative of the bass viol but with a double set of strings – six gut strings in front, nine wire strings in back – has a strong relationship to the story of a quirky, influential Hungarian prince and his tastes in music.

Its specific origins are vague, likely beginning when a luthier in the early 17thcentury combined the viola da gamba and the bandora, a long-necked plucked string instrument similar to the cittern. Evidence of extant instruments or descriptions found in documents suggest that only 50 were ever built before modern versions in the 20thcentury (including one created by luthier Hans Benning of Benning Violins in Los Angeles in 1963).

Barytons have two sets of strings, one that is bowed and a second, behind the neck, that is plucked. A second function of the back strings, which are made of wire, is to vibrate sympathetically. The sympathetic tone was occasionally referred to as the buzzing of bees, however when plucked it’s not unlike the sound of a harpsichord. The player is required to have the same nimble mental skills of an organist, playing two lines of music simultaneously.

But it was Prince Nikolaus, a nobleman of the Esterhazy family that was among the landowner magnates of the Kingdom of Hungary, who brought the instrument to its highest levels of popularity in the 1760s and 1770s. Nikolaus had, as did much of the European aristocracy, his own court musicians; consider how in the time before recorded music it was mostly the rich who had music performed in their homes (castles, mansions and palaces), with cheaper recorders, lutes and human voices at best the instruments of the masses.

Nikolaus had the good fortune of inheriting Joseph Haydn, the Esterhazy Kapellmeister (master of music) from his deceased brother, along with the title prince. To please his new boss – and to make up for some indiscretions – Haydn honored Nikolaus’ wish for compositions for the baryton. Alas, the 123 trios are Haydn’s least-known works due to the rarity of the instrument.

The instrument has, after a century of neglect, been revisited and played in the 20thand 21stcenturies. This began with a revival in 1936 in Munich, where a copy of the instrument was made for Christian Dobereiner, a German player and conductor who was a proponent of Early Music.

The Nikolaus baryton, made by J.J. Stadlmann in 1750, survived World War II and is preserved in the Hungarian National Museum. Haydn’s own baryton, also made by Stadlmann, is also preserved and housed in the collection of the Gesellschaft der Musikfreunde Wien. The International Baryton Society was created in 1992 to assemble and disseminate information on the baryton and to organize events, including conferences and concerts. One such concert was held at the palace of the Esterhazy dynasty in modern Hungary.