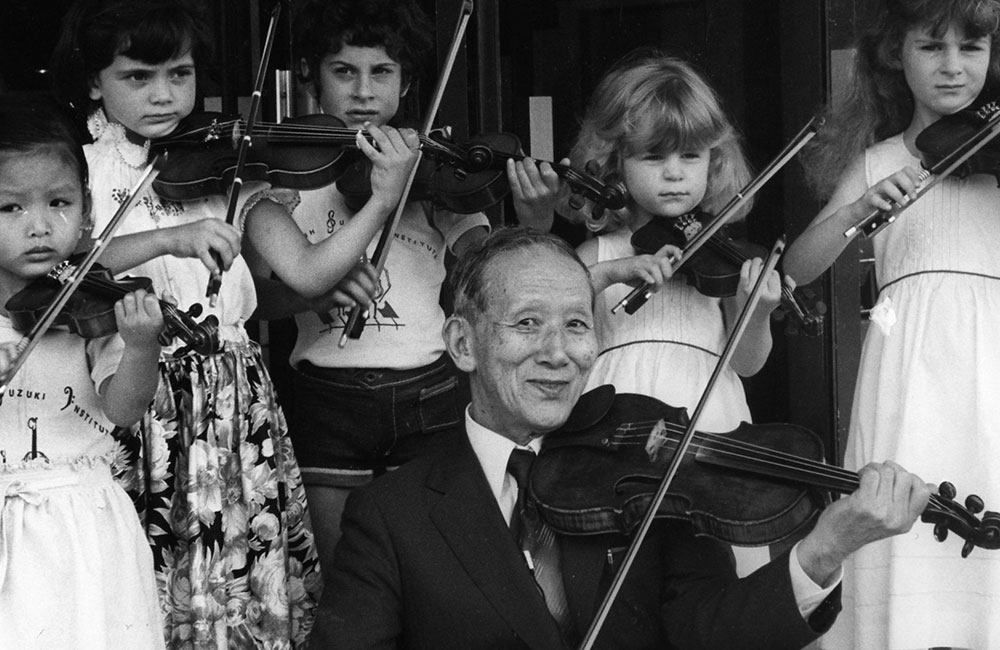 An accomplished Japanese violinist studying in Germany was frustrated that children could learn the language faster than adults. But it birthed an idea.

That is the premise of the Suzuki Method. Its creator, violinist Shinichi Suzuki, was an accomplished violin player who left his native Japan to study in Germany, where he noticed children easily pick up new languages while adults like him struggled.

This led to the development of his method, which promotes a very early introduction to music in children, who study how the instrument works, what good music sounds like, and how they can create the notes, tonality and articulation of what they hear on their own (very small) instruments. Only after several years of study “by ear” do students get introduced to reading written music.

The Suzuki Method is not just for violinists. One can learn to play by way of these learning principles on the cello, viola, bass, flute, guitar, harp, piano, organ, recorder, mandolin, guitar, trumpet and even voice.

And does it work? The Suzuki Association of America (SAA) promotes the teaching method, and also emphasizes the somewhat democratized nature of it. By this we mean how it eschews competition even while celebrating accomplishment. It also doesn’t reserve itself for “musical prodigies,” perhaps those from a family of accomplished musicians. Rather, the SAA says, “Suzuki students are normal children whose parents may have little or no musical experience. Their parents have simply chosen to introduce them to music through the Suzuki approach, a unique philosophy of music education.”

The local violin shop would likely be a good resource for locating a reputable Suzuki teacher. Odds are, a violin dealer already provides Suzuki-sized instruments for other students learning the Method.

The principles of Suzuki can begin even before the musician is born. An expectant mother can listen to classical music from stringed instruments, which perhaps the developing fetus can hear as well. Other fundamentals include:

Adherents to the Suzuki Method emphasize it’s not strictly for children on a path to careers in music, although that’s obviously a possibility. But it could be a foundation for artistry in many forms. Actress Sarah Jessica Parker studied by the method as a child, prior to being cast in the star role of “Little Orphan Annie” and later roles as an adult.

The Method may be too taxing for some parents. But for those who might enjoy the journey of learning to create beautiful music with their children, it might be just the right thing.