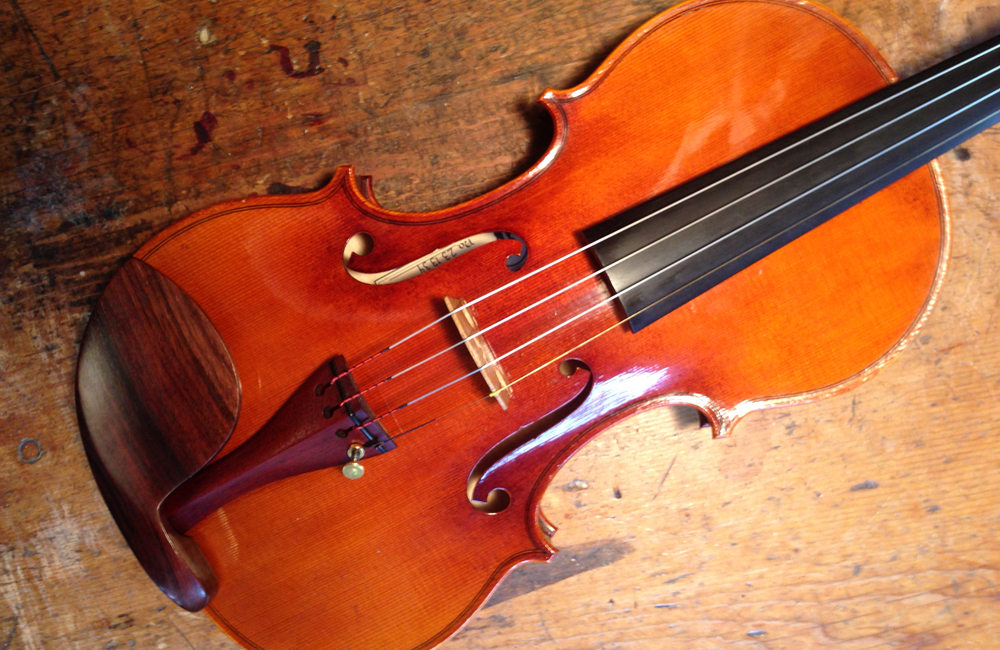 Benning crafted the violin in 2011, a superb and powerful solo instrument based on a renowned violin by famed Italian violinmaker Antonio Stradivari. It was one of over fifty master violins included in the exhibit that were made by modern masters like Benning, Roger Hargrave, Nathaniel Rowan and Giancarlo Arcieri.

According to Julie Reed-Yeboah who organized the exhibition, “the idea behind the exhibition is to wow people to see what is available. I’ve been representing modern makers for quite some time, “ says Reed-Yeboah. “Most of the instruments were made in the last year. We’re having kind of a renaissance of violinmaking.”

Eric Benning is a third generation violinmaker from the prestigious American violinmaking heritage of Carl Becker Sr. from Chicago. Eric was born into a family with a rich tradition of craftsmanship that has been passed down from one generation to the next. Beginning his training at the age of 9, Eric completed his first instrument before he was even a teenager.

Working in a shop where his grandfather, Paul Toenniges, his father, Hans Benning, and his mother, Nancy Benning, were all very accomplished makers and experts in restoration, Eric received training of the highest level in both new making and the art of fine restoration. Eric continued his training with his second cousin, Carl Becker Jr. while studying violinmaking in Wisconsin. Eric now crafts violins, violas and cellos out of his shop, Benning Violins, a mainstay institution on the West Coast providing repair service and sales of fine instruments to the Southern California classical music scene.

Instruments that Eric has made are being played by some of the top professional musicians, both in the U.S., Asia, and Europe. His violins are made on multiple models including Stradivari, Guarneri, Guadagnini and Balestrieri.

“I am extremely honored to have my violin included among so many modern luminaries of violinmaking,” said Benning. “It is largely due to the efforts of individuals like Julie Reed-Yeboah, whose shop sponsored this exhibit, that musical artists of all calibers are realizing that modern makers are closing in on the few last remaining mysteries of what made the Italian master violins so great.”

‘There’s a lot of young makers here who are coming up and will probably be the future’s greatest violinmakers,” observed Reed-Yeboah.