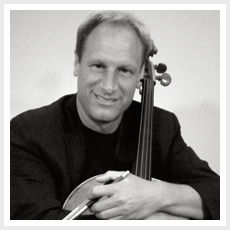 Cellist Andrew Cook has excited audiences as a soloist and ensemble artist both in the United States and abroad. Mr. Cook received his bachelor's degree from the Peabody Conservatory under Stephen Kates and in 1987 went to study with Lynn Harrell as a scholarship student at the University of Southern California. Concert appearances have taken Mr. Cook throughout the United States, Mexico, France, Moscow, St. Petersburg, Central Asia, and Egypt. As a member of the Peabody Honor String Quartet, Mr. Cook performed live broadcasts for National Public Radio and Radio France, a command performance for Princess Grace of Monaco, and a performance at the Palace of Versailles. In 1988, he joined the Valcoeur String Quartet who were artists-in-residence at the University of Arizona in Tuscon.

Mr. Cook was a founding member of the Vista Trio which has performed worldwide and has released two recordings on the Vision Records label. he has released his own solo compact disc of beautiful short concert pieces for cello and piano entitled, "After a Dream". Mr. Cook was recently a featured actor in an independent film, "Pure", where he plays a cellist and cello teacher. He is also working on a DVD of J.S. Bach suites for solo cello with AIX records.

He has served on the faculties of Goucher College, Pepperdine University, and California State University Northridge. In addition to the Gold Coast Chamber Music Festival he has been a faculty member of the Fairbanks Summer arts Festival. Mr. Cook is also active in the recording, television, and motion picture studios working on music scores for countless films. He is in great demand not only as a performer, but also as a teacher, lecturer, and educator.