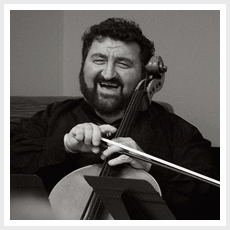 Widely hailed as one of the greatest cellists in California, cellist Armen Ksajikian began his professional career at age 12 with the Abkhazian State Philharmonic (then part of Soviet Georgia). Since arriving in the United States in 1976, he has been very active in the musical life of Los Angeles. He has appeared as a soloist and principal cellist with numerous orchestras in the Los Angeles area, as well as the Bolshoi, Kirov, Stuttgart, Royal and American Ballet Theater orchestras. Ksajikian has participated in many music festivals including the Cabrillo, Colorado, Banff, Sitka, and Venice Film festivals. As a member of the Armadillo String Quartet since 1982, Ksajikian has been involved in such daring events as a 34 1/2 hour marathon performance of the complete quartets of Haydn, as well as concerts from the top of the Mendenhall Glacier to the bottom of the Grand Canyon.

Ksajikian has premiered works by Schickele, Cage, Rosza, Mancini, Adams, Corea, and many others. In 1985 Ksajikian was invited to perform with Jascha Heifetz in his master classes. In 1993 he made his film debut, as a limousine driver, in the action thriller True Lies with Jamie Lee Curtis and Arnold Schwarzenegger. He can also be found in numerous Hollywood recording orchestras, with over 900 motion picture soundtracks to his credit. Armen's hobbies include white water rafting, poker, backgammon, and playing concertos with the Southland's symphony orchestras.