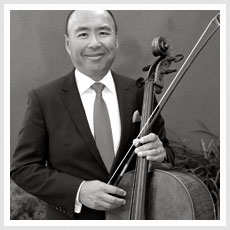 Cellist David Lin is a member of the cello section of The Santa Monica Symphony, under the direction of Guido Lamell. He is currently a student of Los Angeles Philharmonic cellist Barry Gold.

David resides in Manhattan Beach, CA with his wife Anne and two children, Arianna and Andrew.  When he is not playing cello he is a Financial Advisor with Morgan Stanley in their Manhattan Beach office and enjoys travel, Porsche cars, golf and sailing