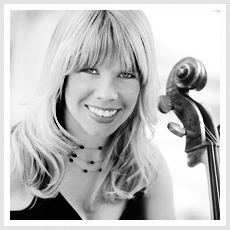 Cellist, Erin Breene, is in great demand as a chamber and orchestral musician throughout the United States. Ms. Breene is the Principal Cellist of Orchestra Nova and has been Associate Principal of the Opera Pacific Orchestra. She performs frequently with the San Diego Symphony, Pacific Symphony and Camarada. With the Andros String Quartet, Ms. Breene was named a Finalist in the 2003 Concert Artist’s Guild competition, Grand Prize winner at the Coleman Chamber Music Competition, and Second Prize winner at the 1999 Fischoff Chamber Music Competition. She has appeared on the Art of Elan chamber music series, La Jolla’s Athenaeum series, and the High Desert Chamber Music Series in Bend, Oregon. Ms. Breene received her Bachelor of Music degree under Paul Katz at Rice University and her Master’s of Music degree at the Juilliard School as a student of Timothy Eddy.