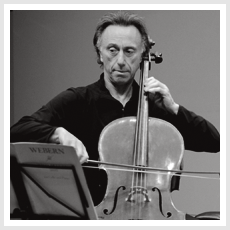 Since joining the Boston Symphony Orchestra's cello section at the age of 19, cellist Ronald Feldman has received critical acclaim for a wide variety of musical achievements.

Feldman has appeared as cello soloist with many orchestras, performing a wide range of concerto repertoire from Dvorak to Ligeti. His many chamber music affiliations have included performances with the Boston Symphony Chamber Players, Collage New Music Ensemble, and the Boston Conservatory Chamber Players. His performances include collaborations with artists Emmanual Ax, Garrick Olsen, Gil Shaham, and Yo Yo Ma.

Twice winner of the American Symphony Orchestra League's ASCAP Award for Adventuresome Programming of Contemporary Music, Ronald Feldman has achieved critical acclaim for his work as conductor. He appeared as guest conductor with numerous ensembles including major orchestras such as the Boston Pops Orchestra, Rochester Philharmonic Orchestra, the Saint Louis Symphony as well as many regional orchestras including the Pro Arte Symphony, Springfield Symphony, Albany Symphony, the Amarillo Symphony, and the Quebec Symphony. After successful appearances as Guest Conductor for three consecutive seasons at Symphony Hall and at Tanglewood, where he substituted for John Williams, Maestro Feldman was appointed Assistant Conductor of the Boston Pops Orchestra. He served as assistant to John Williams from 1989 to 1993.

Feldman currently directs the Berkshire Symphony Orchestra, a regional orchestra in residence at Williams College. Feldman is artist in residence in orchestral/instrumental music, and coordinator of student string chamber music at Williams.