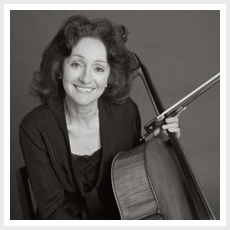 Debra Fayroian enjoys an active and successful career as a soloist, chamber musician, and orchestral performer. At appearances throughout the United States and Canada, she has captivated audiences with her remarkable musical insight and beauty of tone.

Fayroian has been a member of the Detroit Symphony Orchestra since 1975. Prior to her DSO tenure, she was principal cellist for the Toledo Symphony Orchestra. During her years at the DSO, she has been solo cellist with the Detroit Chamber Winds (with whom she has made several recordings on the Koch International label) and has also collaborated with many other chamber organizations, including the New York Pro Musica, Lafayette String Quartet, Ars Poetica, and the Lyric Chamber Ensemble. Fayroian currently serves as Artistic Director of Nightnotes, an annual series of eclectic concerts in Birmingham, Michigan.

Born in Detroit of Armenian parentage, Fayroian studied at the Interlochen Center for the Arts, and later at the Aspen Music Festival. While at Aspen, she was coached extensively by members of the Juilliard String Quartet. Fayroian also studied at the University of Michigan in Ann Arbor, where she was coached by Oliver Edel and Paul Makanowitzky.

Fayroian plays an active role in the musical education community. In addition to maintaining a private class of student and professional musicians, she is founding director of Strings at the Cranbrook Summer Music Academy in Bloomfield Hills, Michigan. Active as a clinician with her husband, DSO Principal Tubist Wesley Jacobs, Fayroian gives demonstrations in area schools.