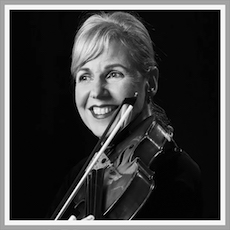 Geraldine Walther is former violist of the Takács String Quartet and was Principal Violist of the San Francisco Symphony for twenty nine years. She has served as assistant principal of the Pittsburgh Symphony, the Baltimore Symphony, and the Miami Philharmonic.

Geraldine has performed on international stages including Musicians of the World in 1995 under Sir Georg Solti; at chamber music festivals including Mostly Mozart Festival, Marlboro, and Tanglewood; as well as performing in quartets including the Tokyo, Vermeer, and St. Lawrence Quartets.

A native of Florida, she first picked up the viola in a public school music program in Tampa. She went on to study at the Manhattan School of Music and at the Curtis Institute. In 1979 she won first prize at the William Primrose International Competition.

In addition to her recordings for Hyperion with the Takács Quartet, Geraldine’s recordings include Hindemith’s Trauermusik and Der Schwanendreher with the San Francisco Symphony under the London/Decca label, Paul Chihara’s Golden Slumbers with the San Francisco Chamber Singers under the Albany label, Lou Harrison’s Threnody under New Albion, and Delectable Pieces as a member of the Volkert Trio under the Con Brio label.

Geraldine recently served as Interim Director of Chamber Music at Colburn Conservatory in Los Angeles. She is the mother of two grown daughters and lives in Longmont, Colorado with her husband Tom.