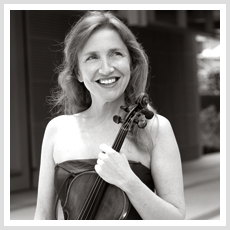 Violinist Aleksandra Maslovaric has performed throughout Europe and North America and is recognized for her virtuosic technique and the "heartfelt nature of her interpretations."

Born in Belgrade, Serbia, her musical talent and stage presence were recognized at an early age, leading to regular performances including frequent national television appearances broadcast on Radio Television Serbia. While Aleksandra's continuing recording projects and live performances now take her to audiences all over the globe, she calls Los Angeles her home.

Aleksandra was awarded the degree of Bachelor of Music in Violin Performance from the Belgrade Conservatory of Music, and subsequently received the degree of Master of Music, Violin Performance from the University of California, Los Angeles. Aleksandra has studied with prominent soloists Vardkes Boyadjian, Maja Jokanovic, Felicia Moye, Michael Tseitlin, and Alexander Treger.

In early 2000, Aleksandra's interests started to evolve beyond the standard soloist repertoire, and she began to focus her attention on classical works by women composers. Continuing the work of other musicologists, her own research revealed a treasure of musical works composed by women and long overdue for recognition.

Aleksandra's debut album, Feminae in Musica, is a collection of intimate works written and performed by women. Described as "a highly enjoyable recording of almost completely unknown music," the album includes works for violin and piano spanning two continents and three centuries. The first release from Feminae Records, Feminae in Musica attained wide distribution in 2009, and continues to receive airplay on classical radio stations around the world, including the in United States, Japan and England.

In April 2012, Aleksandra Maslovaric's second album will be released presenting previously unrecorded sonatas for violin and piano written by a nineteenth century woman composer. Though quite well recognized during her lifetime, this composer all but fell into complete obscurity after her death. To help correct this oversight and ensure that modern audiences become familiar with this composer's works, Aleksandra is also planning a multi-city recital tour of performances of the composer's violin repertoire. In addition, Aleksandra is already preparing her third album, which is scheduled to be released in early 2013, and will feature the complete works for violin and piano by another until-now-forgotten woman composer.

With her continuing interest in recording, Aleksandra is an active member of the National Academy of Recording Arts and Sciences (NARAS), and in 2010 was proud to serve on the Classical Screening Committee for the 53rd Grammy Awards. She is also a member of ASCAP: the American Society of Composers, Authors and Publishers.