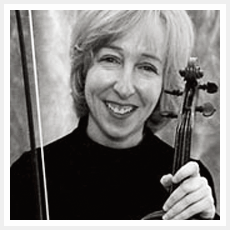 Violinist Sharon Cooper is an active freelance musician in southern and central California.  She studied chamber music at San Francisco Conservatory and holds a BA degree in Music from Stanford University.

On a lighter note, Sharon has often been heard on the soundtrack of Fox TV's animated features Family Guy, American Dad, Cleveland and King of the Hill as well as other TV, movie, original cast theater, and numerous diverse musical recordings.  She has performed with David Benoit, Seth MacFarlane, Electric Light Orchestra, John Tesh, Hiroshima, Frank Sinatra, Jr., Al Martino, Laura Pursell and Riders of the Purple Sage, to name a few.  Her solo violin can be heard emanating from pits of musical theaters in Ventura, LA and Orange Counties, as well as Phoenix and Tucson, Arizona.

Sharon performs on a violin crafted by Benning Violins in Los Angeles, 1985.