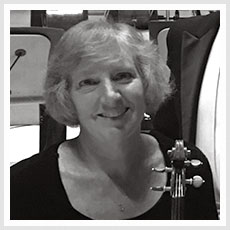 She was first-place winner in the Washington International Competition and the Buffalo Young Artists competition, and she won the Swiss Radio Prize in the Tibor Varga Competition in Switzerland.

Wetzel has been a soloist with the Los Angeles Chamber Symphony and the Buffalo Philharmonic. For two years she was the concertmaster of the Ann Arbor Chamber Orchestra, and she has performed with ensembles including the Soviet Émigré Chamber Orchestra, Chamber Music West, and the Michigan Chamber Players.

In 2001 she moved up to join the orchestra's first violin section. She made her concerto debut with the Philharmonic playing "Autumn" from Vivaldi's Four Seasons at the Dorothy Chandler Pavilion.