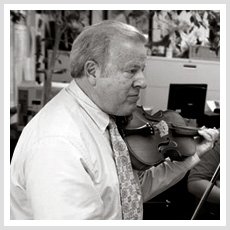 The best-known society orchestra in Southern California became a reality twenty years ago in an apartment above a garage in Silverlake. Violinist Vincent Houser, a former student of Jascha Heifetz, gathered a number of his friends from several local symphonies together with the intention of finding yet another musical outlet in Los Angeles Community.

Thus an orchestra was born which embraced the untapped wealth of American popular dance music from Cole Porter to the swing music of Glenn Miller. Inspired by the Silver Screen of the twenties, thirties, and forties coupled with the desire for an additional income, The Art Deco Orchestra became a reality.

Mr. Houser, already performing arts chairman at the prestigious Buckley School in Sherman Oaks, wore yet another hat – a Top Hat. As Art Deco, he stepped into a pair of spats and patent leather shoes while becoming Southern California's premier society orchestra leader.

The first year for the group had many challenges. Fine musical arrangements were not readily assessable; therefore members scurried from garage sales to obscure music stores throughout the southland in search of music stores throughout the southland only job the entire year was at a cabaret in Venice (not Italy). The second year brought a handful of jobs which included the Cocoanut Grove and the landmark Bullocks Wilshire store.

Thanks to Milt Larsen of Magic Castle fame, the ensemble's salad days were spent at the Variety Art Center in downtown Los Angeles. There the orchestra developed into a first-class, cohesive unit, performing for dancing and numerous cabaret shows.

The orchestra gradually began performing for weddings, corporate events, and even debutante balls. Soon the group was playing at galas, Hollywood parties, and appearing in movies. Most recently, the orchestra was flown to Naples, Florida to a New Year's Eve celebration for one of the most prominent women in the country.